I have written nearly 2000 pieces on India since 1999. In the following compilation, I have pulled about 50 articles on Modi and my commentary on his reckless policies. Let… Read more »

There are two types of Indian Americans – the ones who worship the current government and will never see the faults or criticize them, they consider that to be unpatriotic, … Read more » 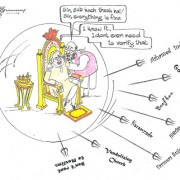 Prime Minister Modi is making all the classic mistakes of a man sitting inside the bubble, oblivious of the chaos outside the thin veil of the bubble. The men who… Read more »

This documentary is about the shameless culture of rape and the courage of ordinary Indians to take a bold stand against it. The leadership thinks it is made to defame… Read more »

If Hindu Radicals have their way, no one will be a Christian, Muslim, Sikh, Jain, Jew, Buddhist or the other – they want to convert 100% of Indians to be… Read more »