Life is all about expressions and completing transactions. Every emotional thought action or change creates a new debt that needs to be re-balanced. Obviously, we cannot reciprocate our parents’ favors… Read more »

Obama is one of the all embracing individuals in the likes of  Pope Frances, Mahatma Gandhi, Mother Teresa, Martin Luther King, Nelson Mandela and a few other great men and… Read more »

Narendra Modi’s Nakshatras (stars) are not in his favor, and the Grahan (eclipse) is hovering over him like a dark shadow casting its Rahu Kala (inauspicious times). His run for the… Read more » 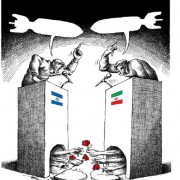 I came across this cartoon today and felt it is very descriptive of the situation in the Israel-Iran conflict.  Leaders are the real problem and not the public.  Instead of finding… Read more »

April 9, 2012 at 4:00 on Sean Hannity Radio  Check your local stations at www.hannity.com/stations and www.hannity.com/guest/ghouse-mike/10804 TALKING POINTS – DEALING WITH THE BROTHERHOOD First of all, I want to… Read more »

URL: http://nabsites.net/demo/muslims-take-on-mr-subramaniam-swamy/ First of all, the dearest person in God’s book Quraan is the one who forgives and secondly Prophet Muhammad (pbuh) has clearly set up a model of behavior for… Read more »

It was a delight to be on Tony Powerz Radio Show this afternoon, a conservative popular talk Show Radio host in South Carolina. The live conversation went on  air between… Read more »

Among Hindus there is beautiful tradition of invoking that aspect of God which removes barriers and paves the way for a smoother life. The icon that represents this aspect of… Read more »