What the majority of Americans want is a just society where everyone feels safe, secure and without the fear of other. What exactly do we want? How will we make… Read more »

Steve, you have made a huge difference in the world of communications and information sharing, and I am one of the beneficiaries of your inventions. Your invention has been a… Read more »

The talk was about the row at Playland, where Muslims celebrated Ramadan festival and it ended up being a sour event. David Horowitz needs to stop making things up and the… Read more »

Among Hindus there is beautiful tradition of invoking that aspect of God which removes barriers and paves the way for a smoother life. The icon that represents this aspect of… Read more »

REPUBLICANS WITH GUTS OUT THERE? Republican fall out in 2012 is preventable,  if they do not let the extremists radical speak up for them. For about a decade Muslims got run over… Read more »

That question is the subject of a growing discussion given that Sarah Palin and Michelle Bachmann both claim to be feminists. Except their feminism differs from the days of… Read more » 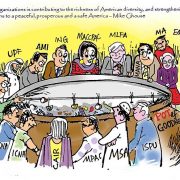 Inclusive Prayers at City of Carrolton Tuesday, July 12, 2011 By Mike Ghouse I am proud of my City, the city of Carrollton for adopting inclusive prayers prior to the… Read more »

Facts don’t matter to some. I am pleased to respond to Logan’s challenge on the net hoping he and his friends will be open to seeing another point of view…. Read more »