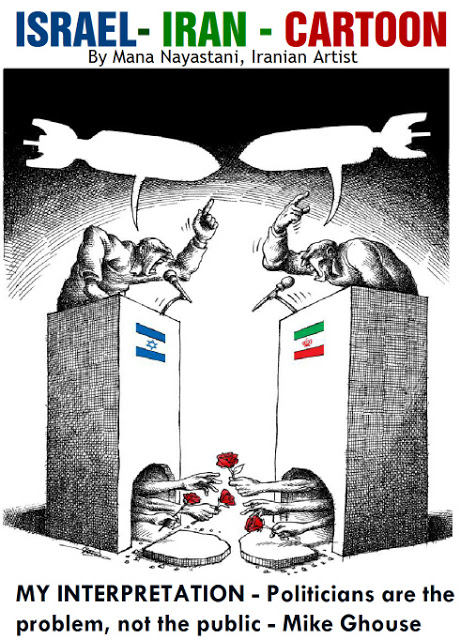 I came across this cartoon today and felt it is
very descriptive of the situation in the Israel-Iran conflict.  Leaders are the real problem and not the public.  Instead
of finding solutions, they talk about bombing. If we can zip up the mouths of Ahmedinejad and
Netanyahu, most problems will fade away.
Prime Minister Netanyahu genuinely wants peace for his
people, but he does everything opposite of the goal, so is Ahmedinejad, wants
the best for his people, but his foul mouth messes up everything.
Both men need to learn about setting a goal, and achieving
it with least damage. Their methodology has not worked. Netanyahu’s ideas will
not bring security to the people of Israel, the kind of security where the
Israelis can be free from apprehension, and can drop their guards and enjoy the life.  Do these men know that, they are the problem?
The radical politicians like Santorum and Gingrich, among several
others are a major problem. From one mouth they talk about security of Israel, but
from the other they do everything to make it worse for Israel. Men like
Horowitz, Spencer and whole lot of them are bent on making it all worse for
Israel and other nations. It is not Israel they care about; it is the gain they
can have in the name of Israel. Remember Madoff?
The Jewish people and the Israelis need to be aware of them,
they don’t need duplicity, they need genuine peace makers who have brought
security to Israel and through that the region. Men like President
Carter and President Clinton who had the foresight to see and deliver peace to the peoples, and I hope Obama will have the balls to stand
up to Netanyahu, do the right thing and leave a legacy of goodness to the people of Palestine and Israel.
Instead of finding solutions, they talk about bombing.
These two will destroy Israel and Iran and more than that, they will mess up
American for another decade if they have their way and weaken America in
fighting their wars that are not necessary.
As Americans, we need to know that the Israelis are speaking
up, which we don’t see on our Television networks, but they show it on the Israeli and
European media. This needs to change and we need BBC, Israeli TV and Al Jazeera
for Americans to have another perspective. How many Politicians and ordinary citizens among us are capable of giving another perspective to the issue? We are too brainwashed to even know that there is another point of view.
Should we give currency to the rhetoric of Netanyahu and
Ahmedinejad, or should the public demand them to perform in bringing peace?
Should the silent majority encourage wrong doing by their silence or should
they speak up and take charge of their long term security.
Mike Ghouse is
committed to building a Cohesive
America and offers
pluralistic solutions on issues of the day. He is a professional speaker, thinker and a writer on pluralism, politics, civic
affairs, Islam, India, Israel, peace
and justice. Mike is a frequent guest on Sean Hannity show
on Fox TV, and a commentator on national radio networks, he writes weekly at Dallas Morning News and regularly at Huffington
post, The Smirking Chimp and several other periodicals. www.TheGhousediary.com is Mike’s daily blog.