courtesy Steve Blow of Dallas Morning News – Link : https://www.dallasnews.com/news/2010/09/19/in-defense-of-islam-pursuing-a-civil-dialogue/?outputType=amp By dallasnews Administrator Over and over you hear it said: If Muslims oppose terrorism, why don’t they stand up and… Read more » 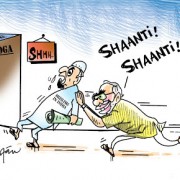 A letter to my Prime Minister Shri Modi by Janab Ali KhanURL – http://nabsites.net/demo/a-letter-to-my-prime-minister-shri-modi/ Kudos to Mr. Ali Khan for writing a thoughtful letter to the next  Prime Minister of… Read more »

THE BIGGER NEWS OF MODI WINhttp://nabsites.net/demo/the-bigger-news-of-modi-win/ The bigger news is that “India has won” as Modi has put it. An ordinary person has made it to the top, that is… Read more »

Thank God for the display of courage by Nada Al-Ahdal, an eleven year old girl who refused to get married or sold off to some old fart against her will. Thanks to… Read more »

URL – http://nabsites.net/demo/sympoium-on-sir-allama-iqbals-discourse/ Dr. Allama Iqbal is one of the greatest philosopher poets of India; he and Swami Vivekananda continue to be the most quoted in awakening the masses with… Read more »

Are Muslims duty bound to participate in elections?by Muhammad Yunus and Mike Ghouse Bad things happen because good people do nothing about it. Indeed, this old adage makes more sense… Read more »