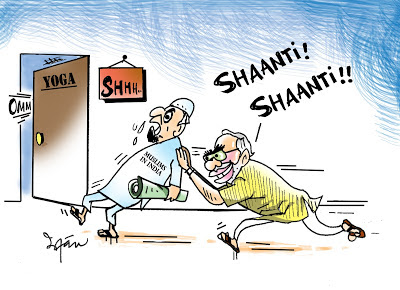 While applauding the position taken by the All India Muslims Personal Law Board (AIMPLB), we hereby acknowledge a few key points about the politics of International Yoga Day and pleased to make a few suggestions. It is a delicate issue, and I pray that Muslims will follow the principles set in motion by Prophet Muhammad (pbuh) and commit to mitigating the conflicts and nurturing goodwill for the common good of the society.

The AIMPLB  sent a letter to these bodies and individuals, Maulana Wali Rehmani, working general secretary of the AIMPLB, has asked for constant vigil against attacks on Islam’s teachings. AIMPLB has also targeted the central government for propagating yoga, surya namaskar and vande matram, “which are part of Brahmin Dharma” and “are against the ideology of Muslims”.


Muslims, Rehmani has said in the letter, must be aware of their ideology, and must research extensively before agreeing to accept any suggestions on changing their beliefs. The government, he has alleged, has been pushing activities like yoga only to hide its failures on poll promises such as controlling prices and retrieving black money stashed abroad.
Acknowledgements;
1. Muslims are not concerned about Yoga, it’s been around as long as they know,  but  they are concerned about the agenda of Hinduizing Muslims that is birthing in series of actions. It is a legitimate jungle after the Ghar Wapsi Drama.
2. While Mr. Modi wants to uplift the nation, his bhakts in his name are messing up the cohesive fabric of the nation. Making statements like, “those who are opposed to should jump in to the sea – Yogi Adityanath.” Who is he to tell me that? If I were to face him, I will tell him to take the lead and go jump in chillu bhar pani (fistful of water).
3. The Opportunist French man François Gautier writes, “By opposing yoga in schools they (Muslims) are showing that they are Muslims first and Indians second.” Gautier is hell bent on placing wedges between Hindus and Muslims; we have seen the likes of him in Cornwallis and Wellesley who succeeded in the past, do we want men like him to continue to dupe and divide us?
4. A few extremists among Hindus look to it as a stepping stone for fulfillment of their dream of pushing India to become a 100% Hindu Nation, completely ignoring the teachings of Hinduism and the idea of Vasudhaiva Kutumbukum and our pluralistic heritage of live and let live.  Can we call them legitimate Hindus? Their acts are certainly not Hindu.

1. Congratulate Mr. Modi for creating a successful day of Yoga, we are proud of the Hindu heritage and its benefits to humanity.
2. Thank the opposition and the GOI for withdrawing the compulsory clause demanding participation from every Indian.
3. The role of leaders, Muslim or otherwise is to advise, but not to mandate it; we leave it up to the individuals to exercise their choice of participating or not in the exercise of Yoga.
4. We are proud of India, and want to preserve its character of free pluralistic democratic nation, where we respect the otherness of others and not impose our ideals on others.  We do not want India to emulate Saudi Arabia or Pakistan where the minorities are pushed into observing Ramadan. We want others to copy the Indian model where every human has a right to eat, drink, wear and believe whatever he or she wants to believe.
5. Let them tear India down; we will put it back together.
6. We are proud of our heritage – a pluralistic democracy where each individual follows his own conscience in being a productive citizen of the collective nation.
Yoga Day, a wrong approach by Government of India
Yoga is the best thing that has happened to humans. It is good for human body as it  increases the cohesive functioning of mind, body and the soul. What messes our body is what we consume; food, water and air, and its regulator in the form of exercise.
https://www.saddahaq.com/politics/yogaday/yoga-day-a-wrong-approach-by-government-of-india

Modi’s bubble and the Chamcha CulturePrime Minister Modi is making all the classic mistakes of a man sitting inside the bubble, oblivious of the chaos outside the thin veil of the bubble. The men who keep him in euphoric status are called “Chumchas” – the “Yes men” of India who will ultimately let their bosses fall from grace. Full article at: http://www.countercurrents.org/ghouse050615.htm

The Surya Namaskar is a Hindu religious tradition, a beautiful act of bowing to the Sun and welcoming the first rays of dawn as an expression of gratitude to the energy it breathes in to life and everything about life.http://nabsites.net/demo/surya-namaskar-and-muslim-response/

To be a Muslim is to be a peace maker, one who seeks to mitigate conflicts and nurtures goodwill for peaceful co-existence of humanity. Mike is a Muslim speaker, thinker, writer, pluralist,  TV-Radio commentator and a human rights activist committed to building cohesive societies and offers pluralistic solutions on issues of the day. His info in 63 links at MikeGhouse.net and writings at TheGhouseDiary.com