Two Islams: Pristine and Mangled-Up is a chapter from the book American Muslim Agenda available at Amazon and Kindle Nearly two decades ago, I argued with the Islamophobes that there… Read more »

Religion can be seen from two perspectives; God and Man. I have interviewed and met many people who were not conditioned with any religion or any versions of God. Both… Read more » 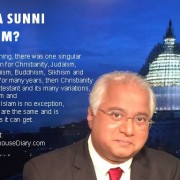 Since, I write about every festival and commemoration of the people of the world, I was asked by a friend and then more asked, how do I pay my respects?… Read more »