This article was first Published on 09/21/2012 01:24 pm at – : https://www.huffpost.com/entry/freedom-of-speech-and-the-legitimacy-of-muslim-protests_b_1902427 The legitimacy of Muslim protests about the film “Innocence of Muslims” and the freedom of speech are… Read more » 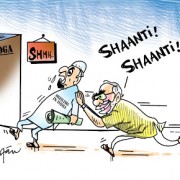 Ghouse Bulletin # 25 | www.TheGhousediary.comSaturday, June 20, 2015 What does it take to change the perceptions about Muslims? Myths about us will not disappear by themselves, we have to… Read more »

PRESS RELEASE Avijit Roy was a software engineer by career, but writing and blogging were his calling. And he did not speak alone. Roy founded the religion-critical blogMukto Mona, which served… Read more »

What is Sacred, Flag, Holy Books, Mother, Freedom of Speech? Sacred Film is about a successful real life event set in Mulberry, Florida coupled with a compelling romantic story built around the… Read more »

This note is in support of the Turkish people protesting against the freedom of speech, and the men and women who are taking the beating to stand up for their… Read more »

The separation of church and state has been a catalyst in guaranteeing freedom to every religious group. This can be better understood through stark contrasts between pluralistic nations and the… Read more »

MUSLIMS DON’T GET IT The Legitimacy of Muslim protests about the film ‘Innocence of Muslims’ and the freedom of speech are major issues facing the world today. I am pleased… Read more »