Some of us who have lost everything in life to a few things or nothing….today becomes yesterday by tomorrow… Another day will be gone, and another month and another year…… Read more »

We certainly read a lot in, yes, newspapers about things going awry. Republican candidates making the case against Barack Obama offer ample examples of the world being a mess. And many a book has… Read more »

Tebow told Fox Sports last fall that he knows about the criticism, but he’s more focused on those who draw inspiration from his public prayers. Said Tebow: “It’s not my… Read more » 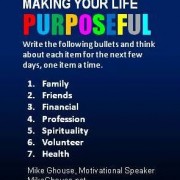 The Israeli leadership does not have a vision and have made gross mistakes over the last several decades. The Jews across the globe need to demand the Israeli Prime Minister… Read more »

http://nabsites.net/demo/good-things-are-happening-in-india/ If we want a positive change that the majority of us inherently want, we have to stoke the goodness in each one of us. I hope these acts of… Read more »