The picture below depicts India before Modi – two kids, a Muslim and a Hindu, are playful and pumping water for each other. Such was my beautiful India, no one… Read more » 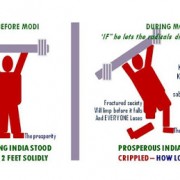 The Message in the town hall meeting delivered by Obama was to have been delivered by Modi.  Politically, Modi had difficulty in telling his party and its affiliates to back… Read more »

As a Pluralist Indian American Muslim, I am a big follower of you two, the greatest orators of our times, and earnestly looking forward to hearing a powerful message of… Read more »