Cruz, Rubio and Trump are the three most dangerous men whom America has ever given birth to, and they are set to ruin the American economy and the American way of life…. Read more »

Presidents do change the character of the party. Bill Clinton brought the Democratic Party to the center; Obama took it a tad to the left. Bush took further to the… Read more »

Bad News for Cruz, he may screw himself. | The Ghouse Diary.com If the Circuit Court of Chicago decides Cruz is not eligible to run for President, and when it… Read more »

PATHETIC REPUBLICAN DEBATE Republicans need to earn support from the intelligent people also who would make at least half of the American voters; they need to offer reason and solutions… Read more » 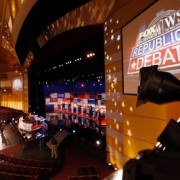 They build expensive glamorous sets, don’t they! It’s like the wedding dress; the woman spends big time money to wear that dress just for a few hours!  It will be… Read more »

This is clearly a propaganda movie, the right wing Republicans will buy anything that is anti-Obama, and they probably swallow D’Souza relentless coaxing Obama’s brother to tell him that Obama… Read more »