http://nabsites.net/demo/romney-there-you-go-again/ Romney: Hey Carl, did you watch the DNC convention? They had every American representation speak out there, boy, if Americans watched that they will not vote for me? Rove:… Read more »

This is clearly a propaganda movie, the right wing Republicans will buy anything that is anti-Obama, and they probably swallow D’Souza relentless coaxing Obama’s brother to tell him that Obama… Read more » 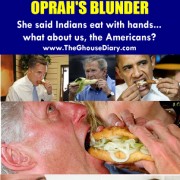 OPRAH’S BLUNDER She has done a two part series on India, and one of the insensitive remarks she made was that Indians still eat their food with hands. I hope… Read more »