The Idea of India is expressed well in this essay followed by 5 videos reflecting our ethos of inclusion and pluralism.
…………………………………….

In my pluralistic India, each one of us makes an effort to see that every Indian feels secure about his/her language, religion, culture, food, clothes, head coverings, ethnicity, race, sexual, political or other uniqueness. We have practiced respecting the otherness of the other for nearly 5000 years; indeed, that is my pluralistic India and qualifies for us to have a seat among the most civilized nations. Most Indians believe that each one of us should have the freedom to eat, drink, clothe, believe, and whatever brings happiness to us, without knocking other’s freedom. What is happening since 2014 is an aberration and will disappear soon. Goodness and the Truth always triumph. 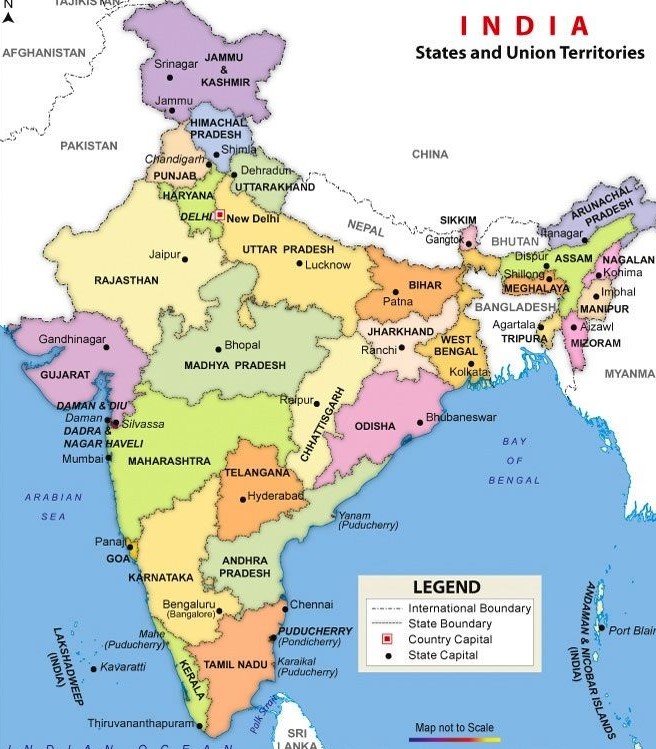 There are several maps of India.

Chakravarti Rajagopalachari was the last Governor-General of India and expressed civility in terms of a woman walking the streets of Chennai any time of the day and night and feel secure about it.  Prophet Muhammad communicated similar thoughts 1400 years ago, where he envisioned a woman going from Medina to Damascus and back safe and sound.

A few among all our groups don’t follow our own faith, they simply don’t get the faith, and culture and resort to thievery, loot, murder, terrorism, rioting, rapes, lynching, infanticide and other evils that destroy the fabric of our society. Fortunately, a majority of each one of our groups regardless of religion or ethnicity go about living their lives and don’t even bother others. We should build upon what the majority of our people seek rather than the few who do not follow any principles.

The India that I have known is where everyone felt secure, day or night, and anywhere on the motherland. No one was afraid of the other, and no one gave tensions to fellow Indians.

As a nation, collectively we are Adivasis, Atheists, Bahais, Bos, Buddhists, Christians, Dalits, Hindus, Jains, Jewish, Muslim, Sikhs, Tribals, Zoroastrians, and every possible grouping. We are Brown, Black, White, Yellow and maybe green with envy, magar phir bhi dil hai Hindustani ( we are all called Indians when we are traveling anywhere on the earth).

Our Motherland is collectively represented by every race, nationality, ethnicity, language, culture, and religion. We see God as one, none and many; and in every form; male, female, genderless and non-existent, being and non-being, nameless and with innumerable names.

Indeed, we should brag about our nation, we are the first nation on the earth where more than three faiths flourished some 2000 years ago. We are proud of our heritage – a multi-faith, multicultural, multi-regional and multi-linguistic society, the first nation of its kind,  where we have come to accept and respect every which way people have lived their lives. For over 5000 years, India has been a beacon of pluralism – it has embraced Islam, Christianity, Judaism, Baha’i and Zoroastrianism to include in the array of the indigenous religions; Hinduism, Tribal traditions, Jainism, Buddhism, and Sikhism.

We may want to consciously start thinking and acting as one people, one people within a nation and a community and one people globally. It’s like home when we are conflict-free.  I do hope each one of us purges any bias towards the other, there is joy in being free from ill-will. Try to be free from this day forward… free from anything that prevents you from being a part of the whole.

Our combined philosophies believe in one world; Hinduism describes the world as Vasudaiva Kutumbukum, the whole world is one family, the idea of Ek Onkar(one) in Sikhism, you are all created from the same couple as Quraan puts it and Jesus embraced everyone regardless of who anyone was… similar philosophies are grounded in all our religions; from Atheism to Zoroastrianism.

On this day, and every day from here forward, make a pledge to yourselves to talk about in terms of “I am an Indian” – and not Malayalee, Gujarati, Bengali, Punjabi…. or Hindu, Muslim, Sikh, Isaee. Don’t expect others to jump and say the same, give them the time and if you are consistent for at least a year, you will see others emulating you.

We have a solid culture of Pluralism, no group or individual can destroy our 5000-year old sabhyata, they may hurt our Motherland for a short while, but we will bounce back. Bad governance has never lasted and will be condemned forever. It is a lesson to bad governors to not earn peoples disgust but goodwill. If India’s current government does nothing and focuses on the economy, and quit experimenting with demonetization, GST, 370, and CAA, India will be back on her track.  They need to quit promoting the Hindu-Muslim non-sense and focus on producing jobs and building the economy and removing fears of any kind among all Indians.

What is Patriotism? It is bringing security to every Indian, and not disturbing their peace. Patriotism is not dying for nations, but living and letting others live. As a nation, we have to earn respect from our neighboring countries so we can earn a seat on the UN Security Council and be the leader among the community of Nations. We need to honor our signature on the Human rights charter at the United Nations. I hope our current Indian political leadership understands what it takes to be the world leader.

By the way, if you would like to learn about Pluralism in Politics, religions, society, and workplace, please visit the home page at  www.CenterforPluralism.com

The above description is about India, is this your India too?

Where have the good days gone?
The music, singing and the dances at friends’ weddings
Groom was my friend, he was either Ram or Rahim
Sometimes Sikh or Jain and sometimes John
His religion never mattered to me, he was my friend

Who does not remember the real and filmi romances?
Nargis Sunil Dutt, Suraya Dev Anand, Kamini Dilip Kumar
Nature brings hearts together, and no one had a problem
No one had a problem with that, everyone minded his or her own business.
The poet said Ishq Per zor Nahin ai wo aatish hai Ghalib (Love happens)
Shakeel, on the other hand, claimed, Pyar Kiya to Darna Kya (Why fear if you fall in love)

Who will forget Krishna’s advice, which the Quran also gave
That whenever confusion, chaos, and distrust goes to extremes,
Someone among us will emerge and restore the righteousness
Achche Din Aayienge, that’s Krishna’s promise and cannot be wrong
(Modified to meet both the traditions?)

The Bhagavad Gita says, Vasudhaiva Kutumbukum,
The Quran, Bible and all other books voice the same
That we all originated from a single couple, and
That we are all one family. Now, we need to follow it.

The following videos fully express what my Pluralistic India looks like, and I hope your vision of India is similar.

Learn Pluralism from the Indian Army. Full piece with 4 great articles at http://centerforpluralism.com/learn-pluralism-from-the-indian-army/

And the following video precisely describes Indian Pluralism, I have lived and experienced every word of hers, Indeed, when I get the time, I will provide a link to each word she has uttered.

And in this video, the poet sketches the map of an inclusive India

India that I love

Learn about my India and its heritage

Achche Din Aayeinge – good days will come back – I messed up one line, it should have been ” O chain ki ratien, o chain ke pal (not Din). I will redo this some other time.

Mike Ghouse is a thinker, author, speaker, newsmaker, and an interfaith wedding officiant. He is deeply committed to Pluralism, Human rights, and Religious freedom. His new book American Muslim Agenda is available on Amazon, coming up are books on Human Rights and Pluralism. He is committed to building cohesive societies and offers pluralistic solutions on issues of the day. His information is available at www.TheGhousediary.com