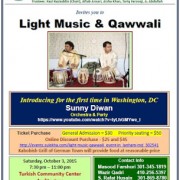 Mike Ghouse is a leading thinker, writer and a speaker on Pluralism / Interfaith. He will deliver a timely message about the need for respecting the otherness of other and… Read more »

It is about the role of Muslims in participating and contributing towards the safety, security and well being of America. It’s our commitment to build a cohesive America where every… Read more »

HONORING NAVY SEALS | A MINUTE OF SILENCE PLEASE In memory of our soldiers and Navy Seals who died on Saturday, please observe a minute of silence honoring them. May… Read more »

http://nabsites.net/demo/day-5-of-ramadan-2011/ Friday, August 5, 2011 | Ramadan 5, 1432 PURPOSE: To share and appreciate the diversity within Islam. THE PLAN: Iftaar at a mosque from every denomination including: Ahmadiyya, Bohra,… Read more »

Whether they are Republicans or Democrats, compromising their integrity for political gains is bad; that is screwing America. They should not have positioned themselves by digging their heels. Newt Gingrich’s… Read more »

The diversity in Islam is incredible, God tests out our tolerance to see if we are capable of accepting different versions of Islam, a majority of us believe in Universality,… Read more »

Muslim involvement in American independence in 1776 . Upon declaration of our independence on July 4, 1776, two of the first three heads of states who recognized the sovereignty of… Read more »