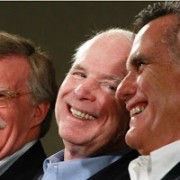 John Bolton has become a surrogate volunteer for Romney, and this does not bode well for presumed Presidential Nominee. Romney could increase his chances if he was true to his… Read more »

When someone is accused of wrong doing, it is the duty of every human to stand up for them; ultimately everyone would be better off. The ABC news has messed… Read more »