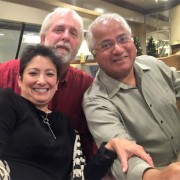 Washington, DC Press Club, December 15, 2015  While I was watching the Presidential debate at the National Press Club, there was another group watching right behind me.  When Lindsey Graham… Read more »