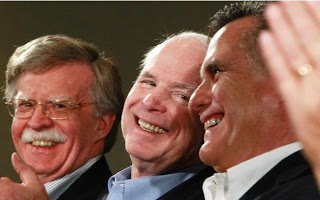 John
Bolton has become a surrogate volunteer for Romney, and this does not bode well
for presumed Presidential Nominee. Romney could increase his chances if he was
true to his own ideals of moderation, but sadly, he has fallen in to the same
pit and has surrounded himself with rash men like Bolton.

There was a little
hope a few days ago, that the Republicans will wake up and clean the party from
radicals who do nothing but destructive and divisive talk that has brought our
nation to this sad economic point in history.
It takes one to change
the world and one to destroy it.
Senator John McCain’s
individualism broke away from being a Republican communitarian momentarily,
when he spoke up against Congresswoman Michelle Bachman’s McCarthyistic
accusations against fellow Americans, then the community of Republicans joined
him, restoring common sense.
Now, John Bolton goes
against McCain, Boehner and the other Americans.
Think Progress
reports, “Today on Center for Security Policy president Frank Gaffney’s radio
show, Mitt Romney foreign policy adviser John Bolton defended Rep. Michele
Bachmann’s (R-MN) call for the U.S. government to investigate suggestions that
government employees — including a top aide to Secretary of State Hillary
Clinton — are affiliated with a Muslim Brotherhood plot to infiltrate the U.S.
government.”
Romney on Bolton,
““John Bolton insists on good results for America and is someone I respect,”
Romney said in December. “I think he’s a fine man with great capacity.”
As a moderate
Republican, I am still hoping Romney had better clean up his people. He is
studded with Bush men all over, and it is not good news for Romney. I am still
undecided, but Romney is not helping either by piling up radical men on his
side to make him a less logical choice.
_______

Mike Ghouse is a speaker, thinker and a writer on the topics of Pluralism, Coexistence, politics, interfaith, Islam and cohesive societies. He is committed to building a cohesive America and offers pluralistic solutions on issues of the day.