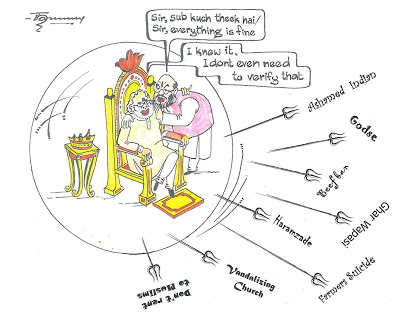 Spread the love
Prime Minister Modi is making all the classic mistakes of a man sitting inside the bubble, oblivious of the chaos outside the thin veil of the bubble. The men who keep him in euphoric status are called “Chumchas” – the “Yes men” of India who will ultimately let their bosses fall from grace.

Their usual line is “Yes sir, your programs are working beautifully, there is no need to worry, everything is perfect, my hoon Na! (I am here to take care of you). Mr. Modi is so self absorbed, that he does not even question the veracity of the reports or may not even see the reports. His eerie silence does not bode well for India.

The Chamchas bring the downfall of the leaders and kingdoms. Way back in 1799 the two chamchas of Tipu Sultan Poornayya and Mir Sadiq were telling him everything is alright, but they weren’t.  Girish Karnad writes in the dreams of Tipu Sultan that Tipu was aware of these men making deals with Lord Cornwallis behind his back, and that he was going to deal with them, alas he had done that.

George W Bush had his own reverend chumcha Cheney, who kept telling him, “Sir, everything is alright” and brought destruction to America and the world. Alas, God had gifted a brain to this dolt.
Prime Minister Indira Gandhi, has a much thicker bubble around her, she had no idea what was going on, the chamchas including Siddhartha Shankar Roy  kept saying, “Madam, everything is going good, as you had wanted” and she almost turned India into the dictatorship through her emergency rule, I shudder at the thought of what would have happened to India – it would have spun us off the orbit of democracy. Thanks to the Journalists and the media persons who went to Jail to protect our freedom, and now we have many such heroes amidst us to protect us from Modi going the wrong way.

A powerful leader is the most dangerous person for a democracy, and a powerful media is a blessing to a democracy and guarding the rights of the people.

George Bush was a powerful leader, in the wake of 9/11; he frightened everyone including the gutless Senators, Congress persons and even the Journalists to question him. The destruction he brought upon us and upon Iraq, Afghanistan and the world could have been prevented, had the American Media asked the right questions.

Here comes Modi – a partial replica of George Bush. Bush ruined it by his frightening talk, and Modi is doing it by his silence.  Both leaders were elected with huge mandate.

Shamefully, the Indian Media is flooded with the chumchas, who are ready to praise Lord Modi at every instance.  Here is Jefferson’s wisdom for them, “The basis of our governments being the opinion of the people, the very first object should be to keep that right; and were it left to me to decide whether we should have a government without newspapers or newspapers without a government, I should not hesitate a moment to prefer the latter….”  Thomas Jefferson.

Describing the role of the press, George A. Krimsky, the former head of news for the Associated Press’ and co-author of Hold the Press, writes, “In the wake of America’s successful revolution, it was decided there should indeed be government, but only if it were accountable to the people. The people, in turn, could only hold the government accountable if they knew what it was doing and could intercede as necessary, using their ballot, for example. This role of public ‘watchdog’ was thus assumed by a citizen press, and as a consequence, the government in the United States has been kept out of the news business.”   Indeed, a true journalist is someone who is not a chumcha of the government, and we the people should be skeptical of all the journalists who praise the government.

Modi lives in a bubble, there was a time he cried and was true to himself, shame on his chumchas, and he is not true to himself any more. His bubble is becoming translucent; he cannot see what is going on outside of it.

President Reagan advise to Modi would be, “Surround yourself with the best people you can find, delegate authority, and don’t interfere as long as the policy you’ve decided upon is being carried out.” And he would add, “Trust but verify”. Ronald Reagan.

Indeed, his dream is being jeopardized by his own chumchas and may bring his downfall, if he skip the verify part.

Sab ka saath sab ka vikas – that is, working together brings prosperity to all. His administration is doing everything to compel people not to work together and ripping their liberties and hell bent on dividing India. They are telling what an Indian can eat or not eat, believe or not believe.  The process of blatant discriminating against Muslims in employment and housing has begun, and on and on and on. Modi’s eerie silence on the issue is chilling, he is being told, and everything is alright sir. My hoon na!

Modi’s slogan, “We will build toilets and not temples” brought a lot of joy to the Indians. He is the first leader of independent India to even think and do something about it.  But his men and women are hell bent on forcing religious conversions, vandalizing churches and pushing a pluralistic Hindu faith into becoming a violent religion.

Does he want this or is he being bullied into silence? Whatever it is, he needs to tear the bubble and reconnect with people and speak up.  Indians are gutsy people and will bring him down as they did with the Almighty Indira Gandhi.

Skepticism is good and without which nothing good can come, and I understand the concerns people have.  In 2014,  I wrote, “I do connect with him now, and I will stick my neck out and say, things will get better under Modi Sarkar, good days are coming for every Indian regardless of his or her affiliation. “  I am withdrawing my neck now, until he comes out of the bubble and restores sanity and cohesiveness of India.

I thank Dr. Thomas A. Kodenkandath/Thommy, a Scientist by profession, and a cartoonist by hobby for drawing the Modi in Bubble cartoon precisely depicting the status of Mr. Modi. He is a graduate of  Indian Institute of Technology-Madras (IIT-M) and is a recipient of several awards, including the Kerala State Lalithakala Academy Award for editorial cartooning

mike
Mike Ghouse,
Speaker
(214) 325-1916
text/talk
…………………………………………………………………………………………..
Mike
Ghouse is a public speaker, thinker, writer and a commentator on Pluralism, Islam, India, Israel-Palestine, Politics and other
issues of the day. He is a human rights activist, and his book standing up for
others will be out soon | He is producing a full feature film ” Sacred” to be released on 9/11
and a documentary “Americans
together” for a July 4 release.  He is a frequent guest commentator on Fox
News and syndicated Talk Radio shows and a writer at major news papers including
Dallas Morning News and Huffington Post. All about him is listed in 63 links at
www.MikeGhouse.net and his writings are
at www.TheGhousediary.com – Mike is
committed to building cohesive societies and offers pluralistic solutions on
issues of the day