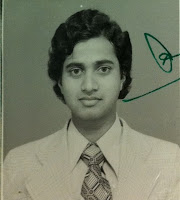 On December 6, 1979, I landed in New York
straight from Dhahran, Saudi Arabia and stayed at YMCA. Then I went for a walk
in Manhattan…a gang of nearly eight men chased me, calling me an Iranian,
like a stupid, I waved them my passport, that I was an Indian…one of
them shouted, you’ all are the same. I am glad they did not snatch it away…

I was told by my American fellow workers in Dhahran, not to go to New
York for a visit, it is a different country… “we don’t own it”..
most of them were Californians. NY at that time was different as well.

Anyway, I did not
know what to do, so I ran towards a police officer far away… the guys chased
me, I was fast… I used to run 6 miles every morning in Saudi… when they saw
I was closer to the police officer, they held back. I asked the officer if he
can help me get to the subway, and he obliged.. the good man walked with me and
waited till I boarded the sub….

I can never forget that day! The images are vivid. Elsewhere in the
world, no one wants to be around cops, but this was a life changing experience
to me, that I can go to cops. Since then, I have viewed cops as friendly folks
guarding the safety of citizens. By the way, my daughter went through police
training… she and I watched NYPD, she wants to be the shrink in that show…
she has stayed the course and is graduating this Saturday and will pursue her
Master in Social Work or Psychology. I have always had respect for police since
then. The concept of police is different in the America, they are one of us
living in our communities, I wish this approach becomes the norm in all other
nations.

Of course there are bad cops, bad presidents of the United States, bad
news reporters, bad Americans, bad Muslims, bad Christians, bad Jews, bad
Palestinians, bad Indians, bad others, and bad parts of the city…. the 1% of
badness in society is part of the whole we know, we see and interact. The evil
is always 1% of everything in life and it will remain as such. It is up to us
to see that 1% as 100% of a group or just 1%. of that group. I hope we learn to
discern between 1% and 99%.

MikeGhouse is committed to building a
Cohesive America and
offers pluralistic solutions on issues of the day. He is a professional speaker,
thinker and a writer on pluralism, politics, civic affairs, Islam, India, Israel, peace and
justice. Mike is a frequent guest on Sean Hannity show on
Fox TV, and a commentator on national radio networks, he contributes weekly to
the Texas Faith Column at Dallas Morning
News and regularly at Huffington post, and
several other periodicals across the world. The blog www.TheGhousediary.com is
updated daily.