Muslims back Obama, but by smaller margin than in 2008 http://www.religionnews.com/politics/election/muslims-back-obama-but-by-smaller-margin-than-2008 (the article is copyrighted hence, the link)   Note:  Except a few pieces, where something is written about me… Read more » 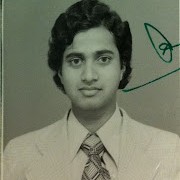 http://nabsites.net/demo/my-first-day-in-new-york-and-nypd/ My passport picture 1979 On December 6, 1979, I landed in New York straight from Dhahran, Saudi Arabia and stayed at YMCA. Then I went for a walk in… Read more »