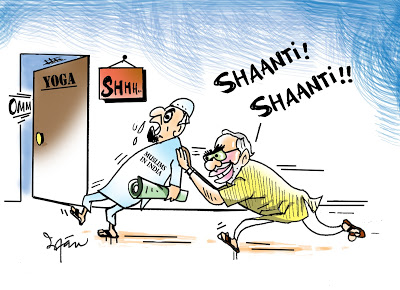 Spread the love
Yoga is the best thing
that has happened to humans. It is good for human body as it  increases the cohesive functioning of mind,
body and the soul. What messes our body is what we consume; food, water and air, and its regulator
in the form of exercise.

Over the years
the entire world has simultaneously discovered a fairly decent combination of
foods and water to keep us in shape and healthy. However, we missed out on the
third important element; air.   Thanks to the Indian Yogi’s for their tapasya
and giving us the gift of Yoga.

The Indian Government
has announced an International Yoga Day making it compulsory for everyone to
observe. However, it should have been introduced as an option, giving complete
freedom to choose, rather than making it compulsory.  When people are given choices, it will
increase acceptability with least resistance; I mean any change for that
matter, it goes thru the same process.
Nowhere in the civilized world are
people forced to do things against their will. Tobacco and Alcohol are
injurious to health, yet the products are not banned. We give choices to the
people; we put warnings on tobacco products and Alcohol, but don’t push people
to stop consuming. The United States tried prohibition and failed,  Andhra
Pradesh Government failed as well. If someone thinks Saudi Arabia
has succeeded, they
are wrong, there is more alcohol there than in free markets.
The best example of failure
of imposition other than Alcohol is Hindi. When Hindi was imposed on south, the
South resisted violently even today, many from TN, Karnataka, Kerala and some
parts of Andhra resist learning Hindi and I am sure there is resistance in
other corners as well.  It was simply
because it was pushed on them. Did you see some of the BJP ministers took the
“national” oath of office in Tamil and Telugu and not Hindi? Do you remember
Jayalalithaa protesting to Modi to not tweet in Hindi? Does the Maratha pride
allow them to abandon Marathi and accept Hindi?

Yoga is wrongfully perceived as a Hindu value.
The problem is two sided; in the US a few years ago, the Christian
fundamentalists declared Yoga was a Hindu thing and Christians should not
follow it. I had written some strongly worded notes about it.  The other side of the coin is the
fundamentalist Hindus claim that Yoga is a Hindu value and westerners are
usurping it, stealing it as their own. Both are wrong, good things are good
things and for all people.  Because of
the fundamentalist Hindus, Yoga is perceived as a Hindu thing.

A few extremists look to it as a stepping stone for fulfilling their dream of pushing
India to be a 100% Hindu Nation by 2025 and no wonder Muslims and Christians
will resist it.  As free Indians we all
should resist any bloody imposition on any one of the 1.25 Billion of us,  if  some
of us  “rejoice” pushing it on unwilling
citizens and trampling on their freedom,  believe me, their freedom will be on the
chopping block next.  We rise and fall
together as a nation.

The mess up came from a few loose mouths who made a big deal that “India is
second and Islam is first to Muslims” – looks like that is the statement they
wanted to deliver. They are wrong.  The
BJP-RSS considers it a victory to force Muslims to obey, they get a sadistic
joy out of it, and that is one of the reasons for resistance.  Yogi
Adityanath says, those who are opposed to should jump in to the sea, he is
no ordinary man; he is the MP and a Mahant with substantial following like the
Baghdadi Guy.

India’s
famous opportunist François Gautier writes, “By opposing yoga in schools
they (Muslims) are showing that they are Muslims first and Indians
second.”  And now consider this response
from the Right wing Christians,” By opposing Christian prayers in schools
they (Hindus) are showing that they are Hindus first and Americans
second.” Both the statements are equally dumb and stupid.
Christian
Prayer should not be equated with America, nor should Yoga be equated with
India.

Gautier knows what appeases the Hindu right and baits them with it, and “Apna
ullu theek kar leta hai” makes his own good fooling them and
receiving accolades. The problem is not him; it is the men that fall prey to
his divisive rhetoric.

My
conscience prevents me from doing what he does, if not I can earn a lot of
fame, influence and money – all I have to do is bad mouth Islam and Muslims, and
they gloat uncontrollably and take care of him.  François Gautier is hell
bent on placing wedges between Hindus and Muslims; we have seen the likes of him
in Cornwallis and Wellesley who succeeded in the past, do we want men like him to
continue to dupe the Indians?
Let them tear
India down, we will put it back together.
As Indian
Americans, we should oppose any bloody imposition on anyone, using the language
of a few radical members of the Parliament, a right winger American can easily
say, if you guys have a problem with Christian prayers, go back to where you
came from, this is a Christian Nation.”
Thanks to the large majority of Americans,
they will not let anyone say that non-sense and get away with it.
I don’t know what Mihir Meghani (President
of Hindu America Foundation) will say about this. He and I have opposed
the placement of Ten Commandments in public places, particularly the High court
in Texas.  Now would he oppose imposing Yoga on others in Indians?
Shadi Katyal writes, “India
which was once the only nation where any person could come and seek refuge and
help and become part of the culture.
USA did not even exist but now I feel sorry and afraid that India of the
past has become xenophobic and closed minded one. The people are being bred to
teach hate against the other minorities
and I see dark cloud over the nation.”
Khalid Azam brings out a good question,
“The five daily prayers prescribed by Islam are [also] known to provide a lot
of health benefits. Does that mean it is acceptable that the five daily prayers
be made mandatory on all Hindus or non-Muslims living in Muslim countries like
Malaysia, Gulf etc? One of the ministers from the Hindu Right Wing group says
that if Muslims have objections to Shlokas, they can say “Allah”
instead. Would a Muslim minister state that Hindus can say “Eshwar”
instead of Allah in the Namaz?  Is forced
imposition of salaat/ Namaz any more acceptable? How many Hindus would accept a
mandatory imposition of Islam’s five daily prayers in Indian schools?
I hope most of us have learned
the value of liberty and believe in our immortal declaration, “We hold
these truths to be self-evident, that all men are created equal, that they are
endowed by their Creator with certain unalienable Rights, that among these are
Life, Liberty and the Pursuit of Happiness. That to secure these rights, Governments
are instituted among Men, deriving their just powers from the consent of the
governed;”
As an Indian American who subscribes to
the idea of individual freedom to Life, Liberty and the pursuit of happiness, I
stand opposed to imposing anything on any Indian. India has a major role to play in the world
affairs; these petty things will drown us.

I hope Prime Minister Modi tells this man, “Mr. Gautier, don’t’
divide my nation, I am focusing on development and I need sab ka saath, don’t
ruin it for me, we are not going to put the white guys on the pedestal any
more, we are not going to bow to the Gora people with “yes
sir” any more, hum bhi kisi se kum nahin, we are Indians at heart and we
will work together for every one’s vikas. Don’t ruin my future, lets’ focus on
development.”

I have received several questions and will answer them
all and append here below.
Thank
you,

Mike is a speaker, thinker, writer, pluralist,  TV-Radio
commentator and a human rights activist committed to building cohesive societies
and offers pluralistic solutions on issues of the day. His info in 63 links at
MikeGhouse.net and writings at TheGhouseDiary.com