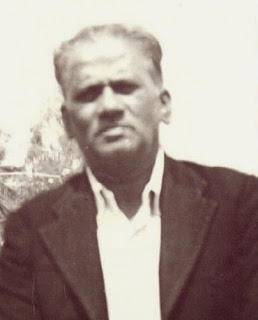 Spread the love
Happy Father’s day | The Ghouse Diary.com
On  this father’s day, I will be dedicating half an
hour to reflect on my father; Mohamed Abdul Rahman.  He is one of my mentors, and an
affectionate and caring father who opened many windows of knowledge for me.

If I am a pluralist today, if I respect the otherness of others and have no
prejudice towards others, it was his teaching; living by example.  With what happened in Charleston two days ago,
McKinney a few weeks ago, Baltimore and St. Louis a few months ago, his stand
on equality in thoughts, acts and talks makes a whole lot of sense.

If you are one of the parents who teach your children to look down on people
other than your own kind, you are essentially running a sewer in their body system and messing them up for a life time. It would be difficult for them to live with people who are different than them.  You must turn in yourselves into
some educational courses to set yourselves free from prejudices. If it is you, please go to interfaith meetings and  inter cultural events, it will gradually fix you up by removing the sewer line and replacing it with oxygen.


In the 1950’s and 60’s India was pretty much like the United States, both nations
treated their Blacks and Dalits shamelessly. The Dalits, also known as
untouchables were not allowed to step in your homes – my father broke all the wrongful
norms of the society, not only did they come in our home, they also ate from
the same plates as we did, and drank the tea from the same cups. Both of my parents were free when they left this world, they were mukt, got their moksha earned their nirvana and received their salvation with Nijaat.
It was a big no-no at that time,  and many of his friends said unsavory words,
but my father stood his ground. I see that streak in me playing it out all the
times. Thank you Dad for inculcating the value of treating every human with
full dignity, and that is just one of the thousands of things you blessed me with. I
love to see all of God’s creation treated fairly and justly.
Indeed, my father endured criticism and some abuse from his
conservative friends; Hindus, Muslims and others at that time.

My parents told us (me and my siblings)
that we are all one family, from Adam and Eve and that we will have differences
and have to learn to live with each other. they often quoted the verse from Quran, to respect the otherness of others – Lakum dinakum Wali addin.

My prayers also go to my father
figure Mr. Everett Blauvelt, who opened the doors for me to enter the United
States.  He was indeed a very caring man and named me Mike. He was a good
listener.

I miss them both today. I also appreciate my friends who are
father figures to me – Davendra Maini, Bill Matthews and Harbans Lal.

My heart
goes out to those who did not have a good relationship with their fathers but,
despite that they have survived, and they can give that affection to their
off springs and others. Father’s day is a difficult day for them, while others are cherishing their fathers, they are struggling with mixed feelings to the feelings of hate. It’s not easy, and there is no quick fix to it, other than reflecting on it, and taking the responsibility to your own life. Life is given to each one of us as a trust,  and at least we can live up to it.

Life is all about expressions and
completing transactions. Every emotion, thought, action or a change creates a
new debt or a favor that needs to be re-balanced. Obviously we cannot
reciprocate the favors in full, but we have been able to do that with a thank
you in the most simplistic way and that is good enough.
One of the incomplete transactions of
my life was not being able to do the things I wanted to do for my father. As a
kid I would step in and take over the work from him so he can take rest, an
Indian tradition that I cherish. When I moved to Saudi Arabia on an assignment,
I sent my first check to him with which he started paying off my loan. With the
next check I asked him to buy clothes for the family and wanted him to replace
his old black Jacket he wore forever with a new one. He said no, first things
first. In the first week of December 1977 my check paid off all my loans, and
with the next check I asked him to oblige me, and he said he will. Man, I am feeling a deluge of
emotions as I am writing this for the 2nd time, darn it. my eyes are
welled up again.
He did not get the check; he passed away a day before receiving it.  He lived up to his own words, “Until my last breath, I will be earning my living
and taking care of my family.” Darn it, he did it. I was angry for my
helplessness, and was happy that the man kept his word. But that created a huge
vacuum in my life and I continue to recover my balance by serving the senior
friends in whatever little way I can. You can always count on me to drop
everything off to attend to a senior’s request.
My father is my hero and opened the
doors of wisdom to us. Pluralism indeed runs in my family. He taught one of the
biggest lessons of my life in social cohesiveness and dealing with extremism
that I continue to reflect in my talks, acts and write ups.
During the communal riots in Jabalpur
(India) in the early sixties, both Muslims and Hindus were killed in the
mayhem. I wish every father in India, America and elsewhere teaches this lesson
to his kids. He was crystal clear on his take; He told us the “individuals”
are responsible for the bloodshed and not the religions; he would emphasize
that you cannot blame the intangible religion and expect justice, we must blame
the individuals who caused it and punish them accordingly for disturbing the
peace and thus bring a resolution to the conflict by serving justice. He said
you cannot annihilate, kill, hang or beat the religion, then why bark at it?
My father was a Mayor of the Town of
Yelahanka (The town gave birth to Bangalore in 1537) and served the council for
many years. He was also the president of the Muslim Association of the town.
We grew up with no barriers between us and other human being.

He treated all of us kids with dignity and I am pleased I got to be disciplined
at least once in my life. I guess I replicated that with my children to the point my kids
would actually say, Dad, you should have disciplined us. I did not see the need
for it. I am fine and they are fine too. I gave them the cold shoulder that my
father had given me to straighten me out, and it worked both ways, although my
daughter was a tough cookie, she would not budge.
I was about ten years old and watched a
man fall off his bicycle with his big bag of rice and was struggling to get
back on it, and I wasn’t going to help him, instead I was laughing at him. I saw my father about 100 feet
away and the way he sped towards me, which got me frightened for the first time, I
dashed inside the home and a few minutes later after helping the guy,  he came in dashing… I climbed on top of the
paddy bags in a corner of the house, I thought he could not get me there, so he
goes outside and plucks a long branch off the mulberry tree and gives me a few
good ones. “My son will never do that” after that conditioning, I
have developed the habit of stopping for everyone who needs help. I dare not
watch and not do something about it.
To those who have not had a father or
had a negative experience, God has offered guidance through the instrument of
forgiveness to release you from the pain. Just do it. I will be happy to be a
big brother or even a father figure in the moment of your need. It’s an open
offer to call me at (214) 325-1916, let’s keep it to 5 minutes.
God bless us all, Amen!
Thank
you,
mike ghouse
(214)
325-1916

Mike is a speaker, thinker, writer, pluralist,  TV-Radio
commentator and a human rights activist committed to building cohesive societies
and offers pluralistic solutions on issues of the day. His info in 63 links at
MikeGhouse.net and writings at TheGhouseDiary.com