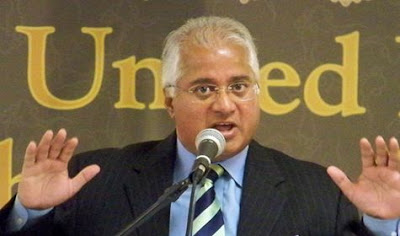 Is God a villain of Jeb Bush, Carson, Kasich, Fiorina, Paul,
Huckabee, Santorum and others? Is God a friend of Ted Cruz and Marco Rubio?

Here is my write up at Dallas Morning News  published February 16, 2016.
MIKE GHOUSE, Foundation for Pluralism
My father’s words jumped at me when I read the phrase, “outward
professions of faith.”
He was a mayor as well as a respected uncle of the town, and
everyone came to him with their problems for solutions. It was a small town
called Yelahanka, a suburb of Bengaluru, India. Obviously the majority was
Hindus, but we had Muslims, Sikhs, Zoroastrians, Jains, Christians and the
Dalits.
Every time someone came and said, “Believe me, I am a good
Christian, Hindu, Muslim or a ….” My father’s ears would perk up, and he would
become extra vigilant. After the individual left the house, he would tell my
mother, “I am still waiting for an individual who would say, I am an honest guy
and I have this problem with the other person. He would add I rather believe
the person who does not profess “outward professions of faith”; Why does he
need to use God or a religious shield?
Indeed, my ears perk up when I encounter those who wear their
religion on their sleeve. In fact, a handful of imams, rabbis, priests, and
pastors have not failed me in my caution, no one has robbed me, but they have
not been truthful to their congregations in my interfaith interactions with
them.
When Ted Cruz said, “Let me first of all say, to God be the glory”
and Marco Rubio uttered “my Lord and Savior Jesus Christ.” Is God favoring
these two over others? Is God a villain of Jeb Bush, Carson, Kasich, Fiorina,
Paul, Huckabee, Santorum and others?
God expression should be personal and not for public consumption.
God loves each one of us equally and does not favor one over the other. If he
does, we don’t need a prejudiced, discriminatory God like that. Would God place
an individual in the White House to carpet-bomb civilians elsewhere or bomb the
nations to the ground? Heavens no, God is not in the business of bombing
people. He has given us the discretion: Some get it, and some don’t. We the
people need to elect those who are determined to preserve harmony of the
creation be it among individuals, between nations and the environment.
When God created animals, he gave them horns, fangs and paws to
settle their disputes with an attitude of you survive or I. But when he created
humans, he did not give us fangs, paws or horns to fight, but a tongue to talk
and resolve our disputes. Anyone who wants to bypass talks need not be our
president.
Cruz and Rubio (and others) are running for public office and not
the pulpit. I have seen politicians of all religions deliberately use God in
their language. It may be a part of their nature to make God expressions, but
when they say it in public, making it obvious for the camera, I question their
sincerity. Maybe God is all that’s left to rescue them rather than their record
or their abilities. Should I trust a candidate because he or she invokes God or
because he or she is capable?
Please don’t invoke God in the public for the purpose of show,
unless you are God deficit and need God to side with you to hurt others.
# # #
There are six more opinions on the issue at Dallas
Morning News
http://dallasmorningviewsblog.dallasnews.com/2016/02/texas-faith-commander-in-chief-or-preacher-in-chief.html/
Mike
Ghouse
Text or Talk at (214) 325-1916

Dr. Mike Ghouse is a community
consultant, social scientist, thinker, writer, news maker, and a speaker on Pluralism, Interfaith, Islam, politics, terrorism, human rights, India, Israel-Palestine and foreign
policy. He is committed to building cohesive societies and offers
pluralistic solutions on issues of the day. Visit him in 63 links at
www.MikeGhouse.net for his writings at TheGhousediary.com