Spread the love
CRACKS IN CHRISTIAN FOUNDATION | THE GHOUSE DIARY

If those (few) church leaders quit bashing other religions, they will not lose their membership to Islam, Hinduism, Judaism or the “Nones.” The story is same from the other pulpits, if they stop claiming superiority of their religion, they will not lose their membership either. Let there be no prejudice and hate coming out of church pulpits, then things will turn around and we may see people flocking to the places of worship back again.

The latest Pew study on religion wasn’t great news for America’s Christian churches. In the last seven years, the percentage of adults identifying themselves as Christians has dropped from 78.4 percent to 70.6 percent. That might not sound huge, but if it continues falling at that pace, Christians will make up a minority of Americans in a few decades.
On the other hand, faiths such as Judaism, Islam and Hinduism are showing solid growth in our country. But the group making the biggest splash is “Nones” – atheists, agnostics and others who profess no religious affiliation. Many of them are millennials, and their numbers are growing.
Is Christianity becoming less important to Americans? 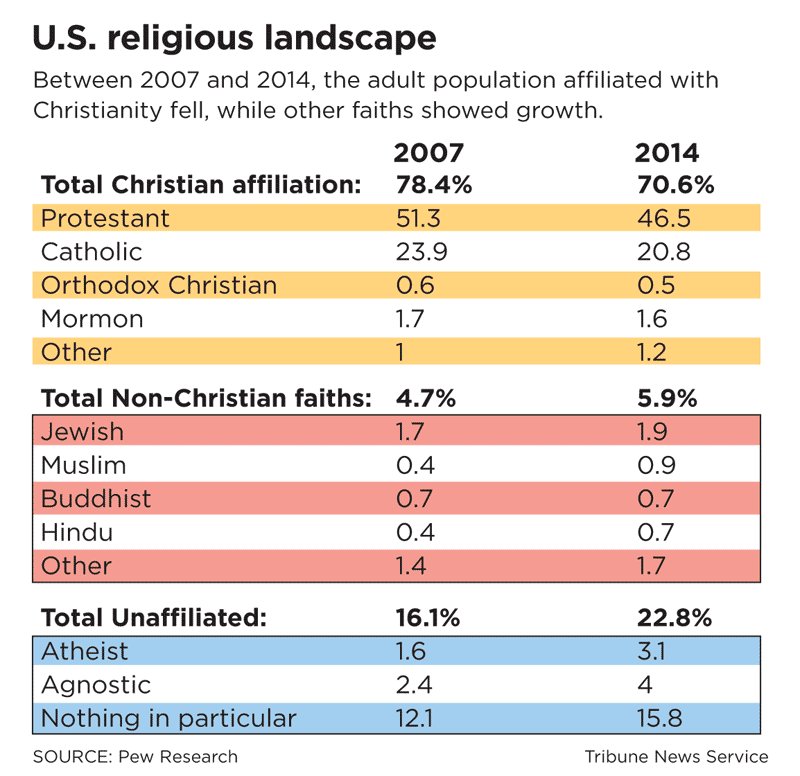 Are churches not meeting people’s needs? Do people think faith in a higher being is irrelevant in today’s wired society? Is there a feeling that you have to check your brain at the door when you listen to a sermon at church or go to a Bible study?What do Christian churches have to do lure people back into the pews? And what are Islam, Judaism and Hinduism doing to raise their numbers?

MIKE GHOUSE, President, Foundation for Pluralism and speaker on interfaith matters, Dallas
Fear motivates action, and the majority in every nation, whether it is religious, political, racial or ethnic is constantly worried about their future. The question that haunts them is what will happen to them if minorities will become the majority. Will their lifestyle change, would they be forced to do things against their will?
The answer can be “nothing will go wrong” to “everything can go wrong” and a whole lot of different answers, depending on how we set up the systems.
A good example of assuring ourselves a guaranteed continuation of our values is sticking to our constitution, let our immortal declaration be our guide, “We hold these truths to be self-evident, that all men are created equal, that they are endowed by their Creator with certain unalienable Rights, that among these are Life, Liberty and the Pursuit of Happiness. That to secure these rights, Governments are instituted among Men, deriving their just powers from the consent of the governed.”
We cannot go wrong if this is what we inculcate in every one that goes to our schools, we will have safe and sound future knowing, no matter who it is – Jews, Hindus, Muslims, Gays and Lesbians, Pagans or African-Americans, they will stick to the values we all adhere to. South Africa is a shining example of such a change, when the white minority turned over the governance to black majority, nothing went wrong. Thanks to the leadership of Nelson Mandela.
What binds us is our understanding of the freedom of speech; the recent controversies brought out many interviews from the street – almost all Americans stood up for freedom of speech. Likewise, if we can continue to inculcate the values of freedom, we can be rest assured that no matter who becomes the majority, our values, shared values, emanating from the wisdom of our founding fathers will endure.
In behalf of Muslims, I want to assure you this. Let there be no doubt about it, Muslims are for free speech. When we stand up for free speech, we align with most Americans; this is one thread that binds us with fellow Americans more than any other thread.
I urge fellow Muslims to be open to all the criticism with confidence, don’t shut it, and let freedom of speech remain the corner stone of Islam. Islam stands on its own; it does not need our defense, and it is silly to protect God or the Prophet, they are not weaklings or our property to protect, they belong to the whole universe, don’t they?
Christianity remains an important value associated with American values; however, the nonbiblical hate sermons in a few churches, particularly the evangelical ones will drive people away. If you recall the controversy unleashed by Pastor Robert Jeffress of the First Baptist Church of Dallas, when he called the Quran an evil book, a whole lot of the members clapped and rejoiced. That kind of hate will drive many sensitive men and women out of that church. You will find many who have walked away from Hagee’s church, while Joel Osteen gains new members for his inclusive and sensitive biblical sermons.
Not all churches are losing the membership, but those who are, they can go back to the basics and embrace true teachings of Jesus; of love and embracing the whole humanity. Their hate for gays and lesbians, Muslims, African-Americans and subtle hate for Jews and Hindus need to go. Let Jesus be the example, and they cannot lose but gain a whole of membership.
If those few church leaders quit bashing Islam, they will not lose their membership to Islam, Hinduism or Judaism or the “Nones.” The story is same from the other pulpits, if they stop claiming superiority of their religion, they will not lose their membership either. Let there be no prejudice and hate coming out of church pulpits, then things will turn around and we may see people flocking to the places of worship again.

To read the opinion of other ten panelists, please visit Dallas Morning News at  http://dallasmorningviewsblog.dallasnews.com/2015/05/texas-faith-are-there-cracks-in-americas-christian-foundation.html/#more-55642

mike
Mike Ghouse,
Speaker
Motivational | Pluralism | Human Rights | Religion.
(214) 325-1916
text/talk
…………………………………………………………………………………………………
Mike Ghouse is a public speaker, thinker, writer and a
commentator on Pluralism, Islam, India, Israel-Palestine, Politics and other
issues of the day. He is a human rights activist, and his book standing up for
others will be out soon | He is producing a full feature film ” Sacred” to be released on 9/11
and a documentary “Americans
together” for a July 4 release.  He is a frequent guest commentator on Fox
News and syndicated Talk Radio shows and a writer at major news papers including
Dallas Morning News and Huffington Post. All about him is listed in 63 links at
www.MikeGhouse.net and his writings are
at www.TheGhousediary.com – Mike is
committed to building cohesive societies and offers pluralistic solutions on
issues of the day.