Spread the love
Muslim Bulletin
Insha Allah, I will be in Washington DC between Saturday January 10 through Sunday, January 18 and again on January 26 and 27th for three specific purposes;

1. To share information about the upcoming film “Sacred” – what Muslims ought to be in a given society and hoping to change perceptions about Muslims around the world.

2. To invite participation in the 8th Annual Holocaust and Genocides commemoration, a bridge builder event set for Tuesday, January 27, 2014
3. To establish America Together foundation with a mission to build a cohesive America where no American has to live in apprehension, discomfort or fear of the other. Islam would be a major beneficiary of the work and we will have a strong presence in the media.
CONTENTS OF THIS BULLETIN

A. SACRED, THE FILM
What is Sacred, Flag, Holy Books, Mother, Freedom of Speech?

Sacred Film is about a successful real life event set in Mulberry, Florida coupled with a compelling romantic story built around the Quran burning incident. It is filled with human aspirations, fears, suspense and actions of a typical Hollywood Film.

The film skillfully manages conflicting issues of freedom of speech v what is sacred; safety of Americans v violent reactions; and radicalism v. pluralism. It is an embodiment of conflict mitigation and goodwill nurturance based on teachings of Jesus Christ and Prophet Muhammad. It is a model for building cohesive societies.  Indeed, the concept is encouraged by major institutions.
Through “Sacred”, the world will witness positive changes taking shape; it encourages what Muslims ought to be – the Amins, and how they will be perceived by the society at large. What is good for Muslims has got to be good for the world and vice-versa to restore sustainable harmony.
Sacred is an exemplary story of ordinary Muslim Americans working with fellow Americans of different faiths in forging a new paradigm; a cohesive America where no American has to live in tension, apprehension or fear of the other.

Shooting will begin in March for a September 11 release.  I will be happy to give a presentation to your group.

B. HOLOCAUST AND GENOCIDES COMMEMORATION

8TH Annual public event to be held in Dallas on Sunday 1/25 and Washington DC on Tuesday 1/27 – It is a community bridge builder.

The purpose of this event is education, information and activism. We hope to learn and acknowledge our failings and make a personal commitment to do our individual share of expressing, “Never again”.
Our mission is to create awareness of the inhumanity within each one of us and hope to find the solutions.

The civic leaders, and leaders from the Atheist, Baha’i, Buddhist, Christian, Hindu, Islam, Jain, Jewish, Native Americans, Pagan, Sikh, Wicca, Zoroastrian and other traditions will come together and share their wisdom and their internal commitment to building a cohesive America, where no American has to live in apprehension or fear of the other. We have to do our share of creating the kingdom of heaven right here on the earth.

The Holocaust event has been commemorated by the Jewish community since 1953 for the loss of 6 million Jews during the Holocaust, known as Yom HaShoah in Synagogues around the world.  Now, we have been sharing that information along with the various Genocides and Massacres around the world with public at large.

We at America Together Foundation are committed to spreading the knowledge of Holocaust and Genocides through interfaith and public events for the last seven years. 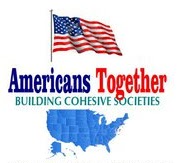 Our mission is to build a cohesive America, where no American has to live in apprehension, discomfort or fear of the other.  We have a few clear cut goals and a few of them are as follows;

1.  Initiate a Leadership program in political Pluralism. We hope to establish the program to orient leaders with the concept of inclusiveness. We want no bigots in our politics and for that we have to start working on it – with a 10 year plan.
2. Establish the Center for Pluralism, an institute to study and teach cultural, family, social, political, and religious pluralism. The shortest definition for Pluralism would be-respecting the otherness of others and when we do that, conflicts fade and solutions will emerge.
3. Push the Interfaith dialogue to its limits, so we can face tough issues head-on, and get it over with it.  I hope we learn to live with our differences, rather than pretending to be nice and live with a load of ill-will within. Such attitudes are explosive and generate phrases like they asked for it, or they deserved it when the other group is in difficult situation.
4. A film “Americans Together, building a cohesive America” is being conceived for a 2016 Release inclusive of the presidential primaries. We are looking to have our presence in the debates as a moderator to hone on the idea of Americans Together.   Hopefully, this would be a first film where almost every representation of America can be seen. It is again a movie to reflect the book Standing up for others and building cohesive societies. The gist of the film can be seen on the home page ofwww.AmericaTogetherFoundation.com
D. ISLAM THROUGH THE LENS OF PLURALISM
Insha Allah we are holding a trial discussion on the topic with an Imam, myself and a Sunday School Muslim Teacher and address – Why are Muslims NOT confident about their faith today?  How do we create an OPEN community life as Muslims?  Is Islam our culture or our conviction? What do we need to do bring about a change? We can take this discussion to different cities.
E. A MUSLIM’S CHRISTMAS

May this Christmas open our hearts and minds to each other and let there be peace on earth. One of the most frequently used words during Christmas season is peace. Indeed, it is a reflection of the innermost desire within each one of us, whether we are Christians or not. Christmas is an annual milestone that intensifies the desire to have peace for oneself and for the world.
Christmas evokes kindness, empathy and goodness toward fellow beings; it’s a euphoric feeling of renewal that Jesus taught to the world, it is a sense of completion one feels when he or she finds in tune with humanity. Jesus showed the way by embracing the whole humanity regardless of who they were. He is my hero, he is my mentor, and he is the first known pluralist on the earth. Christmas is a celebration of that refreshed feeling.
Jesus holds a special place in every one’s heart, but particularly among Christians and Muslims, comprising over half the population of the world.
The Muslims call him Isa-Masih, the one who heals and one who brought life to the dead. The name of Jesus appears 27 times in Quran and one of the 114 Chapters is dedicated to Marryam, Mother Mary and the virgin birth.

Continued  http://www.huffingtonpost.com/mike-ghouse/a-muslims-christmas_b_1167258.html
Other articles on Christmas –

2. Festivals of the world http://www.huffingtonpost.com/mike-ghouse/festivals-of-the-world-es_1_b_4492571.html

The movie is an educational, humorous communications, addressing the critical issues in a society, particularly from a religious point of view.  No one should miss this movie.

There is a good possibility that this movie was conceived from the ideas written by us on Pluralism.

The film is a panacea to the problems we face today.  Indeed, it reflects the values of a common man representative of the moderate majority; namely live and let live. The insecure right wing religious and political leaders of Hinduism, Islam, Christianity and Sikhism may not like this film initially, but will see its value in building cohesive societies where everyone can be safe.  It is one of the best films made highlighting the value of knowing each other as encapsulated in Quran 49:13.

You name the award; the film will bag it including the Oscar.  Insha Allah, in 2015 will be the year for the film Sacred.

More about it at: http://nabsites.net/demo/pk-film-biggest-box-office-hit-is-also/

Thank you
mike
Mike Ghouse
(214) 325-1916 text/talk
………………………………………………………………………………………………………………. Mike Ghouse is a public speaker, thinker, writer and a commentator on Pluralism at work place, politics, religion, society, gender, race, culture, ethnicity, food and foreign policy. He is a staunch defender of human rights and his book standing up for others will be out soon, and a movie “Americans together” is in the making.  He is a frequent guest commentator on Fox News and syndicated Talk Radio shows and a writer at major news papers including Dallas Morning News and Huffington Post. All about him is listed in 63 links atwww.MikeGhouse.net and his writings are at www.TheGhousediary.com and 10 other blogs. He is committed to building cohesive societies and offers pluralistic solutions on issues of the day