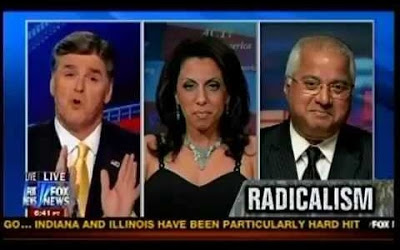 Spread the love
Hannity plan: A Syrian Safe Zone is the most ideal situation for the refugees.
November 25, 2015, New York — Sean Hannity’s radio show is broadcasted across the nation thru 250 affiliate stations.  Brigitte Gabrielle and Mike Ghouse were his guests on the show to discuss the Syrian refugee problems.

Hannity acknowledged and appreciated the demonstration rally Muslims held on the steps of Lincoln Memorial, a symbolic event to condemn the Daesh, Al-Qaeda, Boko Haram and other terrorist outfits wreaking havoc in Syria and Iraq, and to express solidarity with the people of France, Lebanon, Iraq, Syria, Nigeria and other places who are victims of terrorism.


When Hannity opened the topic of Syrian Refugees and proposed establishment of a “Syrian safe zone: a secure no-fly zone where refugees could be housed, fed, and clothed by the international community” – his guest Mike Ghouse instantly saw the wisdom in that proposal and supported it whole heartedly.  Both the host and guests were surprised at this agreement.
When you study the refugee issues from Vietnam, Palestine, Lebanon, Ghana, Iraq, Bangladesh, India, Pakistan, South Korea, Afghanistan, Rohingya, Israel, Native Lands and other places, one common theme emerges – No human wants to be forced out of his/her home. The longing for mother never dies, and no one desires forced separation from his or her mother.
The humility of getting kicked out of your own home is the most difficult pain to endure. The Syrian and Iraqi refugees are going thru a very painful experience and shame on the Governments of US, Hungary and other nations who are letting their representatives callously rejecting the refugees.
The alternative championed by Sean Hannity is “the most ideal situation,” responded Ghouse on Tuesday’s Sean Hannity Show. “The Syrian people don’t really want to leave their country, it is their home. They’re driven out by these extremists, terrorists, ISIS and they have no choice, they’re running for their lives.”
Rejection of people in dire needs amounts to callousness, and stripping their dignity.

Given that,  Hannity’s plan is ideal in many ways – 1) It gives hope to the people in despair, 2) Restores faith in humanity, 3) preserves their dignity and self worth,  4) prevents future dictators from chasing people out of their homes and 5) respect for the people of the United States and lastly an opportunity to value democracy.

Every time the refugees are humiliated, Dr. Ghouse goes back into his reflective mood, shaped by the most gruesome scenes from the Holocaust pogroms. The look on the faces of those men and women when they were marched towards the pit to be shot into it is painful and indelible. Their expression was, we thought you were friends and caring Christians, why are you not standing up for us, speaking up for us? They chose to die in dignity rather than beg for life (Huffington post).  When the ship MS St. Louis turned 908 Jewish refugees imagine the humiliation they felt. That is the ugliest kind of humanity expressed by the men and women in the US Congress and Senate this time around with the Syrian refugees.
Given that, Sean Hannity’s plan is ideal. It upholds the dignity of the helpless; no one wants to leave their home.
http://www.hannity.com/articles/war-on-terror-487284/muslim-activist-a-syrian-safe-zone-14156478/
Muslim Activist: A Syrian Safe Zone Is The ‘Most Ideal Situation’ For Refugees
Posted Wednesday, November 25th 2015 @ 3pm  by Hannity.com Staff
While many American oppose the resettlement of tens of thousands of refugees from the Middle East, a question still remains: what is to be done with them? One of the alternative plans that has been proposed has been the establishment of a Syrian safe zone: a secure no-fly zone where refugees could be housed, fed, and clothed by the international community.
The plan–which Sean has championed since the crisis began–recently gained support from an unexpected source: Muslim activist and president of the America Together Foundation, Mike Ghouse.
“That is the most ideal situation,” responded Ghouse on Tuesday’s Sean Hannity Show. “The Syrian people don’t really want to leave their country, it is their home. They’re going driven out by these extremists, terrorists, ISIS and they have no choice, they’re running for their lives.”
Listen to Muslim activist Mike Ghouse call a Syrian safe-zone the “most ideal situation” for the refugee population:
Read more: http://www.hannity.com/articles/war-on-terror-487284/muslim-activist-a-syrian-safe-zone-14156478/#ixzz3se7GXArN
Dr. Mike Ghouse is a community consultant, social scientist, thinker, writer and a speaker on Pluralism, Interfaith, Islam,  politics, human rights, foreign policy and building cohesive societies. Mike offers pluralistic solutions on issues of the day. More about him in 63 links at www.MikeGhouse.net and his writings are at TheGhousediary.com