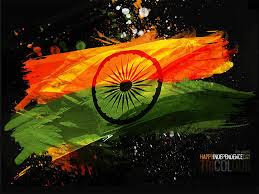 As we proudly celebrate the 69th anniversary of
our independence, we must have a full Thaali in front of us to know our
motherland sufficiently. It must have every ingredient in it from khatta,
meetha, peekha, teekha, khara, patla, gada, sukha, kuchcha and kadva.

Thaali is a balanced plated meal with every ingredient in it; Sour, Sweet,
saltless, tasteless, hot, liquidy, pasty, dry, wet and bitter respectively as
the words in Hindi-Urdu or Urdu-Hindi translate it.

What does that mean? It simply means we have to live with good,
bad and the ugly in each one of us in different proportions.
First, let’s deal with the good.  Like all of you, I am proud of my motherland
India, and my homeland America, both are God’s own countries, let me tell you
why.
We are a full representation of the
universe. As a nation we are made up of Adivasis, Atheists, Bahais, Bos,
Buddhists, Christians, Dalits, Hindus, Jains, Jewish, Muslim, Sikhs, Tribal’s,
Zoroastrians and every possible grouping.

Our Motherland is represented by
every race, nationality, ethnicity, language, culture and religion. We see God
as one, none and many; and in every form; male, female, genderless and
non-existent, being and non-being, nameless and with innumerable names.
We are proud of our nation, it’s a beacon of freedom to the third
world, where people mind their own business and live their own lives with free
will.
We have to be grateful to our founding fathers, each one of them
for going to jail and getting beat up, but worked for creating a better world
for us.

Every day when I open my blog about India, I salute their utterly unselfish
valor. I am not listing their names deliberately, as I don’t want to miss any,
there were so many of them, but I request you to write the names that come to
your mind in the comment section below, by next year, I hope we will have a
complete list to work from. Believe me, I can write the names, I have passed my
IAS and I know my India well.

After the independence, we were blessed with a visionary leader Pundit
Jawaharlal Nehru for nurturing and delivering a pluralistic India to our
generation (born after independence). Dr. Ambedkar gave us a solid constitution
that will carry us far out into the next millennium; Maulana Abul Kalam Azad
laid a great foundation for education with the IIT’s that India is cherishing
now. Sardar Patel, the iron man kept the nation together.  I shudder at the thought of so many other
nations that have gone haywire. Despite Gandhi being shot by an extremist, we did not run amuck, and did not go the wrong way; thanks to Nehru and Patel for saving the nation and putting it on the right path.  The two legged balanced path of social cohesion and economic prosperity.  I salute all the four and others who have
shaped India.

Please remember this cycle; Nehru sought help from America to
upgrade the steel plants and our infrastructure, at that time, the Americans
thought we were not capable of handling the new technology.  That is when the Soviet Union jumped in and
became a partner in our progress. When the Union broke, America was ready to
accept India as equal partner and here we are today. Prime Ministers Morarji
Desai, Rajiv Gandhi, Atal Bihari Vajpayee and Manmohan Singh have delivered a
capitalistic, ready to flourish India to Prime Minister Modi.

Modi gave a lot of hope for change and I hope we realize that, however, his
eerie silence on issues is tearing the social cohesion apart, causing the
nation to be a one legged nation.  We
cannot be blind to it, we must acknowledge it, and all of us must join together
and ask him to restore the social dharma back again. If Modi speaks, people
will listen. He needs to speak tough and take us back to  “live and let live” philosophy of
India.

My request to Modi is to watch for the chumchas, those who assure
him that everything is alright, but everything is not alright, true followers
will tell him like it is and not let him fall in to the abyss.

If you are a genuine supporter of Modi, become his critic, tolerate criticism
from others, and help him fix the problems rather than bulldoze them or remain
silent. Demand the release of Teesta Salvad, a great patriot of India. I would
praise Modi, if he stops his chumchas from shutting a critical voice of the
nation. I will guarantee you this, without the voices of Teesta, democracy will
be the loser and our freedom would be the victim.  Remember Emergency rule?

We must also commit to defend the freedom of others, we must cherish the
otherness of others and let everyone freely breath, drink, eat, wear or believe
whatever suits them, and crush the thoughts of forcing others to behave
the way we want them to behave. No one shall be a slave in free India.

An Indian is an Indian is an Indian, period.
For over 5000 years, India has been a
beacon of pluralism – it has embraced Islam, Christianity, Judaism, Baha’i and
Zoroastrianism to include in the array of the indigenous religions; Hinduism,
Jainism, Buddhism and Sikhism.
We may want to consciously start
thinking and acting as one people, one people within a nation and a community
and one people globally.

Our combined philosophies believe in one world; Hinduism describes the world as
Vasudhaiva Kutumbukum, the whole world is one family, the idea of Ek Onkar (one)
in Sikhism, and idea of one family that we are all created from the same couple
as Quran puts it and Jesus embraced every one regardless of who any one is…
similar philosophies are grounded in all our religions.

A few don’t follow their own heritage and resort to thievery, loot, murder,
terrorism, rioting, rapes, infanticide and other evils that destroy the
fabric of the society,  but a majority of every group goes about
their own way, living their life with struggles and ease and don’t even bother
others. We should build upon the 99% of population and not on the less than 1%
that does not follow any principles.

On this day, and every day from here
forward, make a pledge to yourselves to talk about in terms of us Indians – and
not Malyalee, Gujarati, Bengali…. or Hindu, Muslim, Sikh, Isaee. Don’t expect
others to jump and say the same, give them the time and if you are
consistent for at least a year, you will see others emulating you.
Indian democracy is a shining example
to the world, where the people have peacefully transferred the powers.

Through the years we have expressed the highest degree of maturity on handling
extreme situations; the more divergent opinions we hear, the larger our heart
grows, the bigger our embrace would be and we can cushion more differences.
Let’s continue to honor the concept that there is always another side to the
story, as finding the truth is our own responsibility. I am proud of my
heritage and am proud to be an Indian-American.
Click and enjoy:
Our National Anthem National Anthem 2 Twenty Patriotic songs on click India’s Map

Mike is a speaker, thinker, writer,
pluralist,  TV-Radio commentator and a human rights activist committed to
building cohesive societies and offers pluralistic solutions on issues of the
day. His info in 63 links at MikeGhouse.net and writings at TheGhouseDiary.com