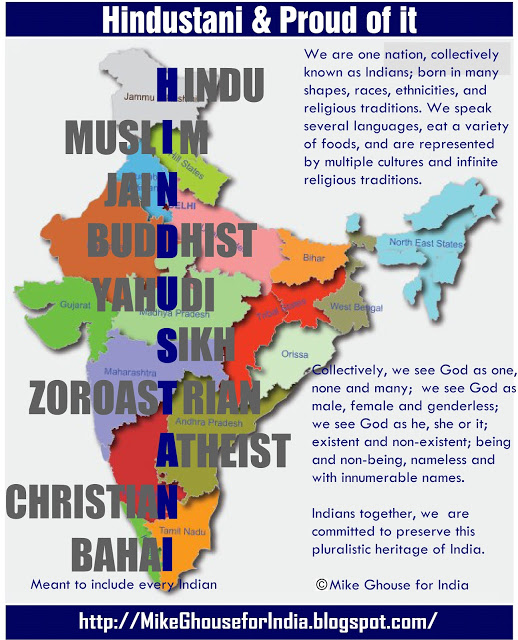 Spread the love
For years, we have seen India presented in incomplete, broken and fragmented pieces. It is time to present India as one nation, we need to talk, act and shape India as one nation, we must include every Indian when we talk about India in general, and exclusion of any one must be considered unpatriotic and looked with disdain. As Indians,  we must commit ourselves and on our part to look, talk one India, respecting its pluralistic sabhyata.

I have seen several versions of power points about India in the last decade… where Jain contribution was completely ignored when it came to temples of India,  Zoroastrians were not even mentioned when industrial progress of India was talked about, a few failed to mention Shahid Bhagat Singh in the array of freedom fighters… or when it came to founders of our nation the pictures of Abul Kalam Azad and Ambedkar were missing in our buildings. We ignore Atheists, they are a significant part of India… whatever category we highlight, at least list the major contributors.

When we say we are Indians, we must take pride in knowing a little bit about India and fellow Indians, and we must challenge ourselves to know at least 3 best things about fellow Indians in any category, be it religious, linguistic, cultural or ethnicity.
Granted, we cannot list everything about India in a snap shot,  but at least most of India and Indians must be represented in the category we are presenting.  I was sick of seeing a broken India in every damned presentation.
We are one nation, collectively known as Indians; born in many shapes, races, ethnicities, and religious traditions. We speak several languages, eat a variety of foods, and are represented by multiple cultures and infinite religious traditions.

Let everyone live his life as he or she wishes, let us eat, drink, breathe, wear or believe whatever we want.  Let India remain a free nation of the people who live and let others live their lives.

Collectively, we see God as one, none and many; we see God as male, female  and genderless; we see God as he, she or it; existent and non-existent; being  and non-being, nameless and with innumerable names.
Together as Indians,  we must commit ourselves to preserve the pluralistic heritage of India.
Mike Ghouse is committed to do his share of contribution in building a cohesive India, his motherland, where no Indian has to live in apprehension, discomfort or fear of the other.
http://MikeGhouseforIndia.blogspot.com
www.MikeGhouse.net