Subject: The good news about India

October 22, 2918, Washington, DC – I am pleased to share a few good things about Indian Muslims, there is hope!

Lt. General Zameeruddin Shah, the former Vice-Chancellor of Aligarh Muslim University, was in town at the invitation of Aligarh Alumni Association, sponsored by Debbie & Dr. Frank Islam and hosted by Fazal & Fathun Khan in Potomac.

He brought the good news about education in India, under Sir Syed Trust, they are opening schools where they were none, particularly in an area with large Muslim populations. Sachar Report has identified those specific areas, and I am glad to see the grassroots actions.

Education is the only way to uplift the downtrodden. The General is a confident Indian Muslim who made a commitment to make AMU, #1 University in India and delivered it. He shared the research advancements made in the areas of agriculture, automotive and science.

The more Indians we pull out of ditches, the more prosperous we all become. The bigger the middle class, the higher the growth and higher the employment.

We cannot rely on the government to uplift us, we have to do it on our own. All we can expect and demand is equal access to the business, economic, social, educational and housing opportunities that other Indians have. Nothing more! 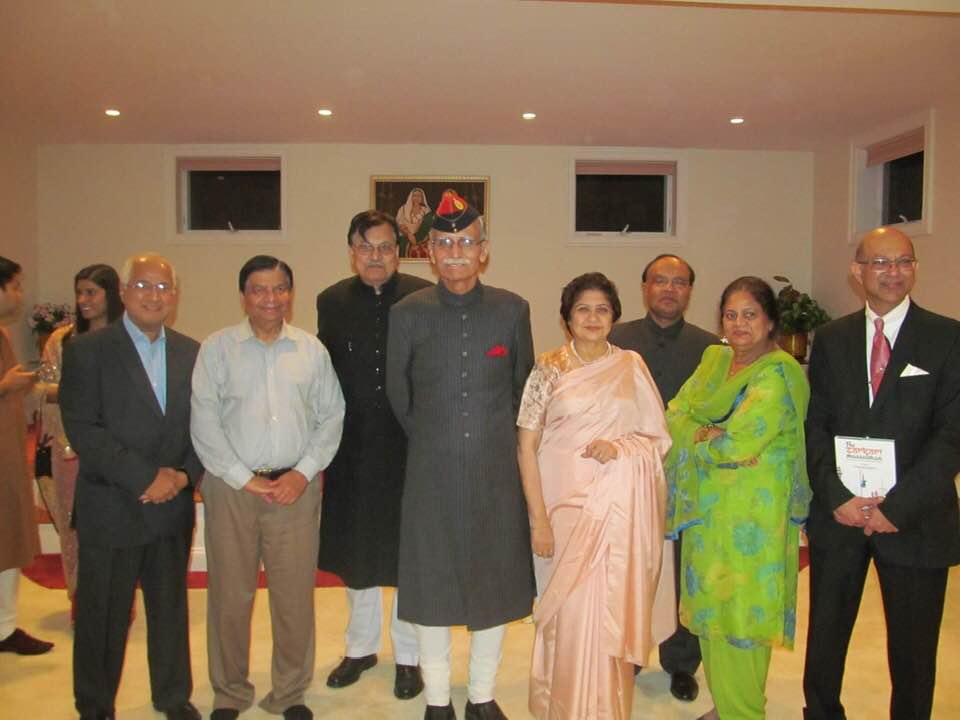 The individuals who conceived the idea of US India policy Institute were visionaries. They fully understood the idea that any legislative or social change comes through planning, nurturing and advocating the policies that will make India an inclusive democracy. Where each citizen can enjoy her or his full rights to life, liberty, and the pursuit of happiness.

Their finest moment came when they appointed  Dr. Abusaleh Shariff to head the policy work. He was recognized as the Economist of the millennium by India Today was listed on 25 alternative power list of the Outlook magazine. He is a leading demographer of the nation. He produced the Sachar Report with a request from India’s Prime Minister Dr. Manmohan Singh. That scholarly report is one of the most cited and referred documents in India. There is not a day that passes without the mention of Sacha Report.

Muslims are beneficiaries of his work, the scholarship is being accessed for students, and the Sachar Report has become the basis for all policy making in India. Sachar report is solid documentation of the status of Muslims in India.

Now Dr. Shariff is working on getting millions of Muslims back on the voter list. This is a massive work and will fine-tune the dynamics of democracy in India. Find Missing Voters app on your android phone.

The IAMC, the Indian American Muslim Council, has finally made the decision to have its presence in Washington, DC. It is good to see their participation in policy-making activities in the United States.

Hindu America Foundation is needed to protect the rights of Hindu Americans, but they have taken an additional task of denigrating Muslims, and that needs to be effectively countered on a daily basis. For a long time, in the Departement of State Meetings and other Religous freedom and Religious Liberty organizations, I was the only Muslim defending the rights of Indians and Muslims and at times countering the take of HAF.

If you recall, I have put together several letters, two of them were urging HAF and other Hindu organizations to join us  with the Center for Pluralism,  in getting visas for the commissioners of United States Commission on Religious Freedom to investigate the Sikh Genocides, Godhra Train burning, the plight of Kashmiri Pundits and the Gujarat Genocide. If India gets a clean chit, it is a good thing, on the other hand, if she does not, we have to work at it.

If we don’t fix the problems, the foreign direct investment may trickle down flowing into India and every Indian whose standard of living has gone up, and the Indian businesses will be hurt severely. Remember South Africa? If the lynching, discrimination, and harassment of Dalits, Muslims, Christians, and Sikhs do not stop, all of us, the Indians will pay a price for it. We have to save India from the Rascals who are ruining it.

IAMC has finally made a great decision to appoint Ajit Sahi as their Director of advocacy, and I would say, he is one of their best decisions. Ajit and I have met several key players to bring awareness of the violations of religious freedom in India, so we can remove the stains and restore India’s glorious past. The center for Pluralism and the Indian American Muslim Council will work together on a few projects related to religious freedom and human rights issue. Our goal is to build a cohesive India, an India where no one has to live in apprehension.

Ajit seems to be committed to this work, and he has the knowledge and background to work with the policymakers. Since I met him a few days ago, he has made a lot of progress, in fact incredible progress. We have met several movers and shakers in a short period of time and continue to do that.  Welcome Ajit, your presences in the Capitol is appreciated. 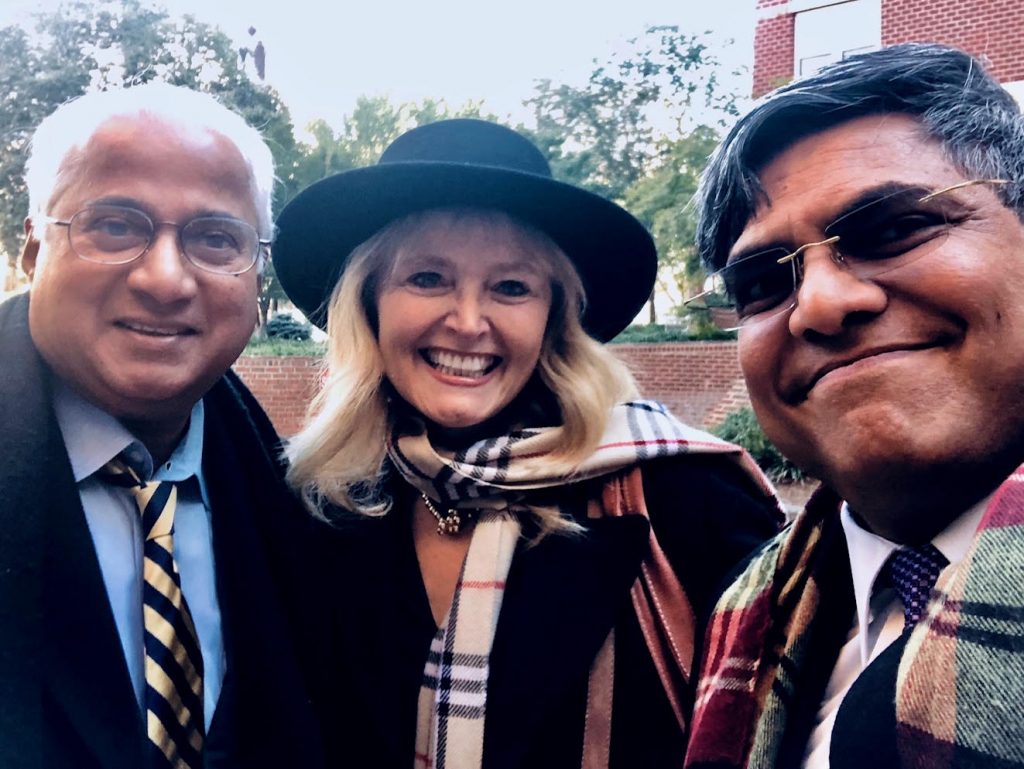 The Book “American Muslims Agenda” is all about American Muslims and the things they need to do in shaping the future of America. Insha Allah, this book will also be published with the Indianized version in 2019 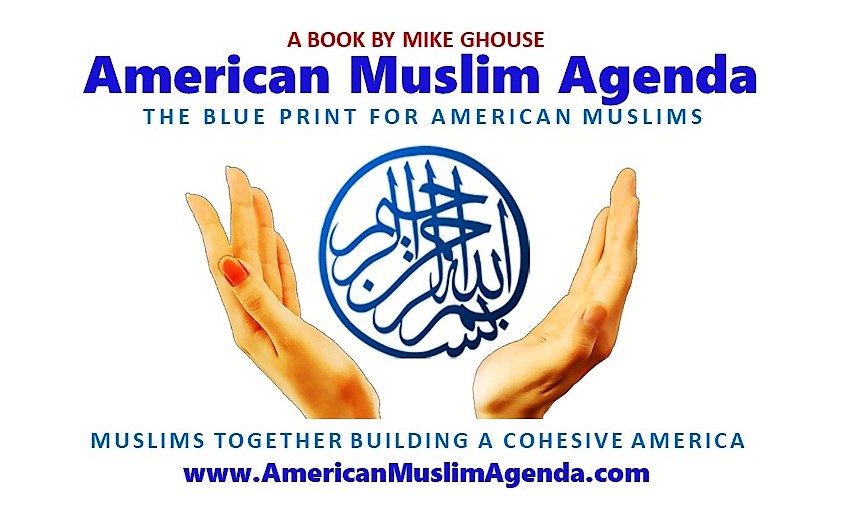 This book, The American Muslim Agenda, is a primer, a blueprint, a roadmap for American Muslims to consider.  A Muslim is someone who should be a conflict mitigator and a goodwill nurturer, following formula for peaceful societies practiced by Prophet Muhammad (PBUH) and guided by the Quran.

As a community, American Muslims have not developed any concrete plans to extricate themselves out of the chaotic situations, hostility and incessant Islamophobic rhetoric we face. Each time a terrorist acts out, we start praying and wishing that the terrorist not be a Muslim.  We are Americans, and we can do better than that.

This book paves the way for us to own the mistakes we have made, remedy them, and become fully integrated Americans.  There is only one America, and all of us are fully integrated parts of that nation.  We need to learn to engage with those who are opposed to us, and I have some success stories to share on that front.

This book, The American Muslim Agenda, is thoroughly researched and is brimming with anecdotes. This book also serves as a reference manual for 12 Muslims Values that contribute to the wellbeing of the society; each value has at least ten verses from the Quran and a quote from the Prophet.

When we start defending America and American values we are in! We become an integral part of American Fabric.

More about the book at https://americanmuslimagenda.com/

What do we do at the Center?
http://centerforpluralism.com/what-do-we-do-at-center-for-pluralism/

Your Donations are appreciated.
We are a non-profit 501 (c) (3) organization.
Please donate at http://centerforpluralism.com/donate/

Dr. Mike Ghouse is a public speaker and the founder and President of the Center for Pluralism in Washington, DC. He is committed to building cohesive societies and offers pluralistic solutions on issues of the day.  More about him at Linked In: https://www.linkedin.com/in/mikeghouse/