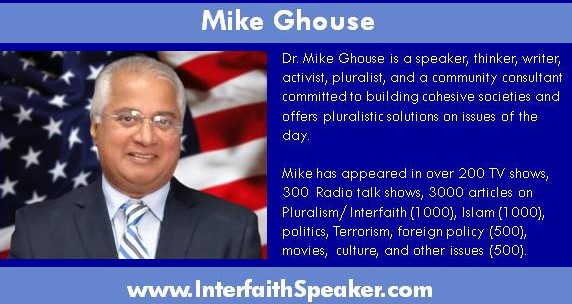 Genuine Interfaith Dialogue | TheGhouseDiary.com
In a Genuine interfaith dialogue, we respect the otherness of others and never claim our faith to be superior to the other as it amounts to arrogance. Religion is about humility that builds bridges between peoples and the communities, and not about arrogance which kills relationships and breeds conflicts.

One of the key things about genuine interfaith dialogue is to develop the ability to see the beauty in other faiths, without having the anxiety to flaunt yours as the best. If we were selling religion like used cars, we have to put others down to make ours look better.

But religion is not a business, it is a system to help an individual achieve his or her own peace within, and peace with what surrounds; life and matter.

When my daughter was going to the Baptist Church, I mentioned to her that if the Pastor decides to denigrate other faiths in his sermons, don’t be gullible to buy it. She came back with a powerful response, “Dad, if the Pastor tells all religions are equal or beautiful, why would people go to his congregation?” He has to tell the people that others are not worthy.

Is religion a business? Is one’s income tied to the number of congregants? Ultimately what difference does it make if you believe in God the Christian way, Muslim, Hindu or any other way?  God loves his creation, all of his creation, and if he does not, then why do we need a God like that?

Over the years, I have heard different versions of the following sentences uttered by Imams, Rabbis, Pastors, Pundits and clergy from other faiths. “No other faith offers this connection with God” – “Only _______ offers salvation” – “Our faith is based on science”, ” _____ is a very logical faith”, “No other faith gives a purpose in life like our _______ faith, ”  Every time I hear that, I cringe. Why are they duping their congregants?   I make quick notes and invariably ask the clergy, if they were aware that other faiths also offer the same ideals, here they are….  they walk away, or double down on it.

A few have said to me, look, if people want to believe in my claims, let them. I reminded them that it borders on dishonesty,  as a religious person, doesn’t he owe the truth to his congregants?

Your faith is as dear to
you, as my faith is dear to me.
I like my faith as you like yours, but…

I will never claim my faith is superior, as it generates conflict, and religion is not about conflict, it is about removal of apprehension and bringing peace.

As I study the beauty of all faiths, I pick things here and there to share.  Here is a chapter from Quran,  called Kafirun,  which has the similar language as the above four lines, and I am hoping to hear from my fellow religionists to share something like this from their tradition. No religion is superior to the other, period! Here it is – http://quraan-today.blogspot.com/2008/07/sura-kafirun-un-believers.html

You will find a handful of religious people, who are honest enough to
acknowledge the beauty of other faiths, without worrying that their
faiths will become less valuable, or others may criticize you.

Again, I am blessed to have written up about every faith tradition;
you can Google search the following:

You can also Google Search

God has blessed me with the ability to stand up for every one, and I have to complete compiling the list, meanwhile, you can check these out.
Dr. Mike Ghouse is a community consultant, social scientist, thinker, writer,
news maker, and a speaker on Pluralism, Interfaith, Islam, politics, terrorism, human rights, India, Israel-Palestine and foreign
policy. He is committed to building cohesive societies and offers
pluralistic solutions on issues of the day. Visit him in 63 links at
www.MikeGhouse.net for his writings at TheGhousediary.com and several blogs
listed there in.