“These guys are frightening some of the innocent and ignorant Hindus to believe that “Hinduism is in danger” and posing themselves as the freaking saviors. Hinduism does not need these men to save it. It is a 5000-year-old robust religion and will always be there like all other religions.” More at https://www.theindianpanorama.news/other-stories/fake-saviors-of-hinduism-at-the-world-hindu-congress-in-chicago/ 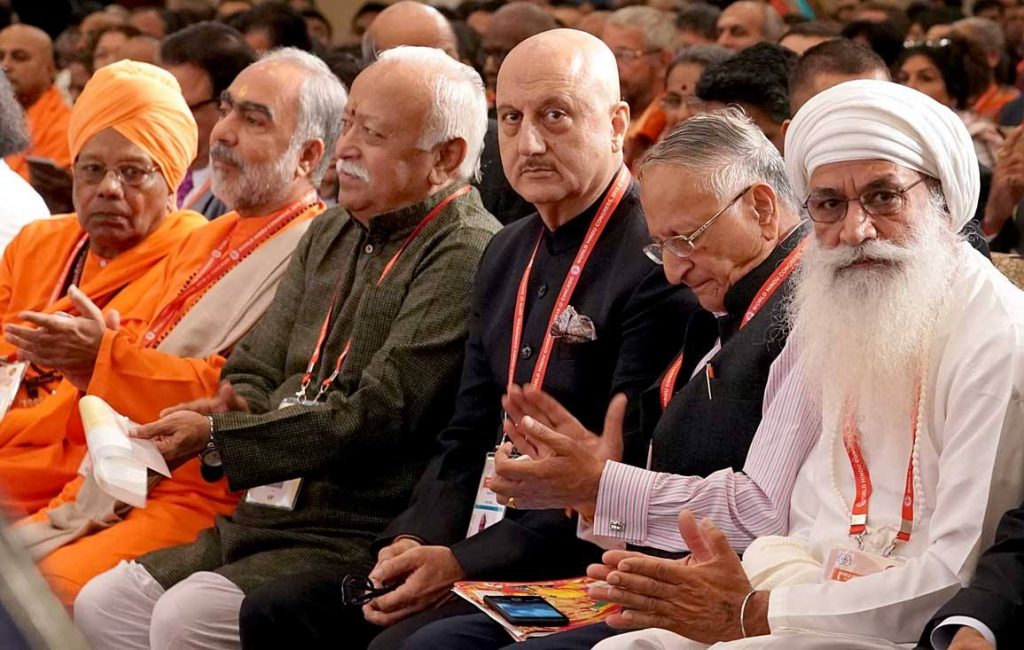 The World Hindu Congress held a conference in Chicago in the first week of September 2018, and it was attended by about 3000 Hindus from around the world. Unfortunately, many speakers fouled, here is an accounting of the two who are divisive and sowed the seeds of ill-will between Indian communities.

Every faith group holds similar conferences, as Americans, we have an opportunity to guide these conferences towards the goal of civility and pluralistic societies, that is, “Respecting the otherness of others,” when we do that, conflicts fade, and solutions emerge.

Each one of us must work towards building cohesive societies where we can live without apprehensions and tensions. No matter what religion you belong to, you must put in that effort.
This conference has listed over 100 speakers including the Rashtriya Swayam Sevak Chief Mohan Bhagwat and Vice President of India Venkaiah Naidu. Can we expect them to talk about the idea of living your life and letting others live theirs? I hope so, but their history points to the opposite. They want to ‘dictate’ what you eat, wear or believe.

Almost all speakers at the event are hell-bent on breaking India to pieces by placing wedges between fellow Indians, at this time, I am familiar with two of the most virulent speakers, and they are Rajiv Malhotra and Dilip Amin.

We unequivocally condemn their false preaching, but spare them, for they know not.
Malhotra panders to the base instincts of humans, some of whom have fallen for him. A few weeks ago, he sent a message urging Hindus to contribute to help Hindus only in the Kerala flood disaster and not Christians and Muslims. Instead of criticizing him for his egregious tweet, a small percent of Hindus have showered him with glory. I am not sure if these Indian Americans have imbibed the American values of caring for fellow humans – which is the value in all religions.

Malhotra is not only wrong but advocating evil acts in the Indian society, dividing it further, causing everyone to live in the hell of tensions.

These guys are frightening some of the innocent and ignorant Hindus to believe that “Hinduism is in danger” and posing themselves as the freaking saviors. Hinduism does not need these men to save it, it is a 5000-year-old robust religion, and will always be there like all other religions.

The other guy speaking at the World Hindu Congress in Chicago is Dilip Amin, whose poster heads as “Interfaith Marriages – Silent Holocaust of Hindus.” On his website, he has placed a few good token messages of interfaith marriages, but his goal seems to frighten Hindus to prevent their daughters from marrying Muslims or Christians.

On his website, he points out that these marriages ultimately will not pan out as one 18 years-married Hindu man says, we are divorcing, she calls me a Kafir. This is the dumbest idea he is selling in Chicago, when people go through a divorce, they resort to saying anything that pisses of the other. It has nothing to do with religion but personal conflicts. When a Hindu woman and man go through a divorce, they label some other reason for their divorce including an abusive, violent relationship, but when there is a religion, they make a scapegoat of religion. There is no need to blame the faith for the acts of individuals.

Over the last seven years, I have officiated nearly 75 interfaith weddings of all combinations. Hindu-Muslim, Muslim-Jain, Hindu-Atheist, Christian-Muslim, Jewish-Muslims and other combinations. The only divorce thus far has been between a Jewish-Christian couple – not because of their religion, but because of the differences in raising their combined children.

They come to me because I do not require conversions, and deliver the sermon in both their religious traditions. Only two people have converted thus far out of their free will, which is a part of the pre-wedding counseling. More at Interfaith Marriages http://interfaithmarriages.org/

Those who convert, do feel comfortable sacrificing their belief for the love they have for the other, and to live with least conflicts and more harmony. Why should it matter to you or me? Do we own them and their souls?

Hindus, Muslims, Christians, Jews or others are individuals who have the freedom to fall in love with anyone and marry anyone for their good. Who are you to dictate who marries whom? American born kids will laugh at his ridiculous attempts to save Hinduism.

One of the members of RSS writes, “Take particular note of World Vision – the worst of the whole bunch bent on harvesting the Lost (Hindu) souls in India via any means – deception, disguise in helping victims. Majority of Christian NGOs are not much better. The Muslims Charities only help fellow Muslims.”

This man is very short-sighted and ill-informed. If everyone in the society starts caring for their own, we will have a disaster on the hand. During the Gujarat Earthquake, Tsunami, Kerala Floods and other disasters, Indians have come together for each other. Americans have gone all over the world to serve fellow humans. That is the right thing to do.

These men also need to know that Saint Mother Teresa saved so many souls and brought dignity to them, the Catholic Charities have helped so many Dalits that the upper Caste Hindus refuse to even go near. Islamic Relief has gone and helped people regardless of their religion in every corner of the world and the majority of Hindus have done the same and will continue to serve and care for fellow beings.

If American Christian Charities had taken the same stinky attitude and not send shiploads of wheat and corn to non-Christians during the famine in the late sixties, India would have suffered a major crisis, that includes extremist Hindus like the three men quoted above.

There are millions of Dalit Hindus who live in utter humility and are humiliated on a daily basis. Let these fake saviors of Hinduism give them dignity, treat them as equals, consider them as Brahmins, if not, let them find dignity in other faiths. To a majority of Hindus, Hinduism is an open universal tradition that has a large umbrella to give its beneficence to all faiths. Hinduism is not a dogmatic religion.

Didn’t some of these guys come to America for making money? So what if Dalits convert to Christianity for money and uplifting their own lives.

Hinduism is not in danger, these guys are making it appear to be dangerous so they can cash in the fears of innocent and honest Hindus. I appeal to every Indian not to support divisive individuals or organizations.

We all have to work towards creating better societies.

Dr. Mike Ghouse is a public speaker and president of the Center for Pluralism. He is committed to building cohesive societies and offers pluralistic solutions on issues of the day. More about at https://www.linkedin.com/in/mikeghouse/