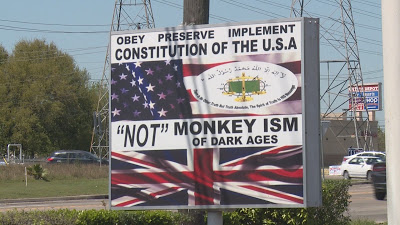 As a Muslim, I condemn the actions of a Muslim Dairy Queen Owner for his anti-Hindu marquis at his business in Kemah, Texas. However, it is obligatory on all of us to verify, if this Report is accurate. Even if the sign did not mean anti-Hindu, it is perceived as such by some of the Hindus of Houston area. Therefore, it becomes necessary to take the sign down to prevent pitting one American against the other.

If Mohammad Dar has mocked Hinduism on this Marquis at his store, it is is not acceptable and as Muslims we condemn his action.

As a Muslim and an interfaith speaker, I want to assure my fellow Americans who are Hindu in this instance, that this man Mohammad Dar is a nut case like so many others.

No religion ever teaches one to be ugly towards fellow beings, and each one of the religions teaches one to respect the otherness of others, and accept the God given uniqueness of each one of his creation. What happens then? Conflicts fade and solutions emerge.  99.9% of the people in each faith get that message right, a few don’t and Dar is one of them.

Take a look at few of the many verses from Quran (Muhammad Asad translation), thanks to Imam Zia and Imam Yahya, my partners in getting the right message of Islam out, for responding to my request quickly.

In this article, I have also thrown a challenge to fellow members of family of faiths including Hindus.

God has created this universe in balance, and whenever that balance is lost, it is our duty to restore it, and that is all religion is about.

Quran, 49:13 — O men! Behold, We have created you all out of a male and a female, and have made you into nations and tribes, so that you might come to know one another. Verily, the noblest of you in the sight of God is the one who is most deeply conscious of Him. Behold, God is all-knowing, all-aware. ( We are all one large family – in Hinduism it is the concept of Vasudhaiva Kutumbukum, and in Abrahimic faiths, we all are children of Adam and Eve)

Quran, 49-10 — All believers are but brethren. Hence, [when­ever they are at odds,] make peace between your two brethren, and remain conscious of God, so that you might be graced with His mercy. – 49:10

Quran,  6:108 — But do not revile those [beings] whom they invoke instead of God, (This prohibition of reviling anything that other people hold sacred – even in contravention of the principle of God’s oneness – is expressed in the plural and is, therefore, addressed to all believers. Thus, while Muslims are expected to argue against the false beliefs of others, they are not allowed to abuse the objects of those beliefs and to hurt thereby the feelings of their erring fellow-men.(Quran Ref: 6:108 )) lest they revile God out of spite, and in ignorance: for, goodly indeed have We made their own doings appear unto every community (Lit., “thus goodly have We made…”, etc., implying that it is in the nature of man to regard the beliefs which have been implanted in him from childhood, and which he now shares with his social environment, as the only true and possible ones – with the result that a polemic against those beliefs often tends to provoke a hostile psychological reaction. (In time, [however,] unto their Sustainer they must return: and then He will make them [truly] understand all that they were doing. – 6:108

Hinduism and Islam teach non-violence, so do other religions, and I ask my friends of faiths, from all faiths to heed this verse.

Quran, 41.34  — “To overcome evil with good is good, and to resist evil by evil is evil.” It is also strongly enjoined in the Qur’an in the same verse 41:34, “Good and evil deeds are not equal. Repel evil with what is better; then you will see that one who was once your enemy has become your dearest friend.”