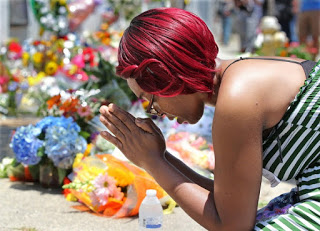 The expanded version of this article is at: http://nabsites.net/demo/international-yoga-day-wrong-approac/

The Charleston church shooting weighed heavily on our panelists this week. Here’s what they have to say about this unspeakable tragedy.

A place of worship is a sanctuary for peace, what a shame it is for a terrorist to barge in a church during the prayers and kill nine people who did nothing to him. Let’s pray for the departed souls to rest in peace, and pray that this situation does not aggravate further.
We endured the Wisconsin shooting where a terrorist walked into a Gurdwara (Sikh temple) and randomly killed worshipers, in response, the Sikhs set the new standards of dealing with the conflict – instead of blaming “all,” they chose to hold candle light vigils across the country and forgave the terrorist. This is an act which Jesus, Muhammad, Nanank and other religious leaders have advocated.
We need to work on greater integrity of Americans for the safety and security of all of us. As a nation, particularly the relatives of the victims can set the new standards – forgive him, but let him remain in the prison until he has a chance to genuinely repent; forgiveness extinguishes the fears and hatred more than any eye for an eye will do. There are more like him, a trial in the court will bring out the worst in him for us to understand his sickness and deal with others. Killing him will kill one person, forgiving and rehabilitating him will save a heck of a lot more lives.
These acts of terror are perpetrated by individuals from every faith, race or region, in no case the religion authorized them to do so.
As a nation we mourn together with a few minutes of silence of our own, without blaming any one, but determined to bring a positive change thru peace and non-violence. We need to find a way to heal. Please take a minute and pray for the improved relations among us all. Amen. God bless America.

Mike Ghouse,
Speaker
(214) 325-1916
text/talk
…………………………………………………………………………………………..
Mike
Ghouse is a public speaker, thinker, writer and a commentator on Pluralism, Islam, India, Israel-Palestine, Politics and other
issues of the day. He is a human rights activist, and his book standing up for
others will be out soon | He is producing a full feature film ” Sacred” to be released on 9/11
and a documentary “Americans
together” for a July 4 release.  He is a frequent guest commentator on Fox
News and syndicated Talk Radio shows and a writer at major news papers including
Dallas Morning News and Huffington Post. All about him is listed in 63 links at
www.MikeGhouse.net and his writings are
at www.TheGhousediary.com – Mike is
committed to building cohesive societies and offers pluralistic solutions on
issues of the day