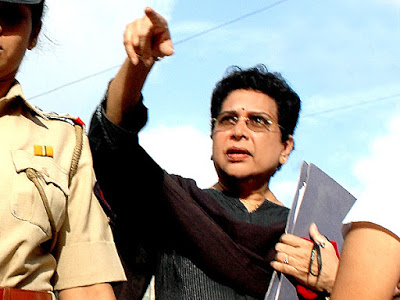 A great country
ensures her population enjoys a sense of security, where each person feels
safe. Every now and then a few short-sighted men take short cuts to justice
cutting themselves short, besides others in the process.  When things go
astray, out of control, Lord Krishna had predicted, and to me it sounds like
the law of nature, that someone from among us will appear and restore Dharma.
These are men and women who see a big picture and not a selfish “me, me
and me only.”  Here comes Rohini Salian, the woman we need to salute.

Courtesy
Indian News – India’s New Hero; Rohini Salian, standing up for Justice
Nothing
in the universe is sustainable if it loses its balance, be it physical,
metaphysical, social or spiritual. Balance is the other word for Justice, and
becomes the solid foundation for any society to exist in harmony.
A
healthy society can be defined by how well it functions together, where no
member of the society has to live in apprehension, discomfort, or fear of the other.
India
is no exception; it has gone thru much turmoil and imbalance in its history and
deserves a nationwide reconciliation virus to eat out the bad breath and clean
us all out.
In
virtually all cases around the world, as in India, a few loud mouths from among
the majority usurp the authority of the majority and speak as if the whole
nation is speaking. The Majority cannot be senseless and devoid of justice, it
is just that they do not have the courage to speak out against the bullies from
among them.
Here comes one such hero in India; Rohini Salian, a public prosecutor in
the Malegaon case, who has impacted the history of justice in India.
Here
are the excerpts from the Editorial at Indian Express dated June 26, 2015;
“The
Malegaon blast case of 2008 marked a sobering and cautionary moment, even a
turning point, in terror investigations in the country. Till then, such cases
invariably featured young Muslim men as accused, and even though convictions
were rare and the wheels of the criminal justice system turned slowly and in
tortuous ways, they confirmed the pattern – and also the stereotype – of terror
being a crime perpetrated by those belonging to one religion. But the Malegaon
probe – by Maharashtra’s Anti-Terrorism Squad (ATS), led by Hemant Karkare, who
was killed during 26/11 – pointed in a different direction. As first reported
by this paper in October 2010, it led to alleged Hindu extremists based in
Indore. A new phenomenon – some named it “Hindu terror” – seemed to
be calling for serious attention and investigation. In asking for a resetting
of the viewfinder, the Malegaon case also sent an important signal to the
minority community and to all those with a stake in the rule of law in a
diverse country. It was this: terror investigations would not be pre-determined
by congealed prejudices; they would go where the evidence led them. “

What a relief! As Indians of all hues, we welcome the above editorial and the
work of Rohini Salian; now take a look at the dirty politics rearing its ugly
head again to destroy Justice and dharma in India.

Rohini
Salian reveals this to the Indian Express in an interview that ever since
“the new government came to power”, she has been under pressure from
the National Investigation Agency (NIA), which took over from the ATS, to go
“soft” in the case, some disquieting questions have been resurrected.
I
urge Mr. Modi to assertively say, “Justice is the corner stone of our Raj
dharma” with the ultimate goal of all Indians to live cohesively without
fear of one or the other. “I am not going to tolerate any such ugly influences
in my government, Justice must prevail.” Modi can do one more thing right;
invite the media to investigate all such influences that leads us into adharma.
The
Ball is in Modi’s court now – does he want to remain quite or speak up with the
God given tongue? Let it not be too late.

No matter how ugly the truth is truth shall set us all free. We have to learn
and to acknowledge and reflect upon the terrible things we have inflicted upon
each other and have to commit to ourselves to resist the temptations to be
prejudiced and stereotype others. We cannot demand peace unless we are peaceful
ourselves.

There
is a shameless cruelty in us, either we shy away from facing or refuse to
acknowledge the sufferings of others, worrying that it will devalue our own or
somehow it amounts to infidelity to our own cause. We cannot justify falsities,
and arrogantly believing that the others are always trouble makers. This mind
set has got to go.
Let
me quote the wisdom of a Native American Chief, “All things are connected.
Whatever befalls the earth befalls the sons of the earth. Man did not weave the
web of life; he is merely a strand in it. Whatever he does to the webs, he does
it to himself.”

Hate
is one of the many sources of disrupting peaceful functioning of a society and
it is our duty, both individually and collectively, to track down the source of
such hate and mitigate it. Indeed, each one of us needs to do our share of
work. This hate takes many avatars including anti-Semitism, anti-Minorityism,
anti-polytheism, Islamophobia, anti-Idol Worshiping, anti-Atheism, racism,
misogyny, homophobia, Islamophobia, anti-others, and other ailments of the
society. Untreated, they will erupt in violent and hostile expressions like
crusades, inquisitions, 9/11, terrorism by individuals, communal riots,
Holocaust, genocides, and massacres.
When
you lose the balance, it keeps losing it to the point of destruction of
everyone, both the oppressors and the oppressed.
Our
safety hinges on the safety of others around us, and it behooves us to work for
the safety and security of others in India. I am proud of India and the
conscience of her majority, if it were not for their sense of righteousness,
India would have been in a worse shape and I am proud of our Media, fulfilling
their role in ensuring that the Dharma prevails at the end. I applaud the
Indian Media.
Satyameva Jayate.

Mike is a speaker, thinker, writer, pluralist, TV-Radio commentator and a human
rights activist committed to building cohesive societies and offers pluralistic
solutions on issues of the day. His info in 63 links at MikeGhouse.net and
writings at TheGhouseDiary.com