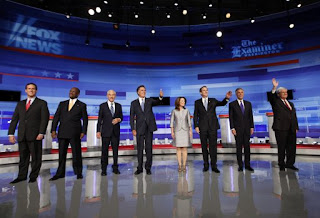 1. Romney Sticks out
2. Gingrich was good, but his bigotry and wife cheating will sink him
3. Bachman did not shine, her idea on debt will cost her
4. Huntsman is ok,
5. Ron Paul is great but he will not make it
6. Pawlenty, Santorum and Cain – will be gone
7. Perry and Romney – will go foward
8. Evangelicals will axe Romney
9. Perry will be the Nominee, unless he goofs up bad

I wrote 3 pieces against the exclusive prayers of Perry, however except that NY statement on GLBT which he needs to clarify, nothing significantly dumb has come out of Perry’s mouth yet. I can understand his need for exclusive prayers with …his crowd, but as long as it is not against others, he may have a chance.

If I were to venture on something important, it’s my family and friends I would pray with and I would extend that benefit to Perry.

Has he made a mess yet?
All indications are that he will make
Mike Ghouse is comitted to a cohesive America and offers pluralistic solutions on the issues of the day. All his work is indexed at www.MikeGhouse.net

KRLD Radio
July 7 at 11:55am
If he is sincere in representing Americans he needs to demonstrate it by inviting them all to his prayer fest. Americans see God as one, none and many and in every form; male, female, genderless and non-existent, being and non-being, nameless and with innumerable names. He has an opportunity to win public opinion if he chooses to go the middle path representing the majority of Americans.

# # #
Dallas Morning News :: Is Rick Perry’s “Day of Prayer and Fasting” about religion or politics?
If he is using this event as a prelude to run for the President, it is another opportunity for him to be a change maker like Presidents Reagan and Clinton who have reshaped the divisive politics into an inclusive one. They were in tune with the sentiments of the moderate majority of Americans; and likewise, it would be difficult to beat Obama with divisive politics, Americans believe in live and let live and who ever aligns with them has a faint chance. http://religionblog.dallasnews.com/archives/2011/06/is-rick-perrys-day-of-prayer-a.html
# # #
Dallas Morning News:: Is Perry responsible for the religious company he keeps?
We should not tie Perry to Hagee or Wagner, nor should we have tied Obama to Wright. They stand on their own and should be accountable for what they say and do, and not who they listen to or friends with. http://religionblog.dallasnews.com/archives/2011/07/texas-faith-are-perry-and-obam.html
# # #
Huffington post :: Rick Perry has to prove his sincerity
If Governor Perry is sincere in calling Americans to join in the prayers for peace and prosperity of our nation, he has an opportunity to demonstrate it by giving a dignified space to every representation of the 312 million Americans.http://www.huffingtonpost.com/mike-ghouse/perry-has-to-prove-his-si_b_874392.html