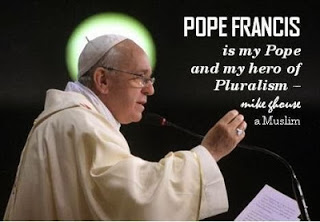 Washington, D.C., September 23, 2015 – American Muslims are delighted to welcome Pope Francis on his first visit to the United States.

We have congratulated Pope Francis on the day he was ordained as the Pope,
and had prayed he would herald a new beginning, building a world of
understanding. As people of faith we welcomed him then and have been admiring
him ever since March 13, 2013.

He is a genuine human being, and is a blessing to humanity.

Two thousand years ago, a man from Nazareth was bent on mitigating
conflicts and building cohesive societies. He taught us to separate the sin from
the sinner, and made it work by embracing sinners of the time; lepers and the
prostitutes. Indeed, Pope Francis is following that man’s challenge of embracing
the whole humanity.

Fourteen hundred years ago, there was another man from Mecca who was
called a mercy to mankind.  His acts and teachings brought hope and relief to
women, children, oppressed, poor, and the neglected. Indeed, Pope Francis is
emulating that man’s model and embracing his ideals.

Pope Francis is an inspiration, and his embrace is the whole universe
beyond political and religious lines.  He is a practitioner of pluralism
espoused by Jesus Christ and Prophet Muhammad (pbuh),  i.e., respecting the
otherness of others and accepting the God-given uniqueness of each one of his
creation. No one falls out of the ambit of his love, none at all.

There are a few deeply rooted conflicts among the Muslim-Christian,
Jewish-Christian, Jewish-Muslim and Abrahimic-Hindu groups, some of them are
irreconcilable, but not completely out of the realm of solutions. They flare up
now and then in difficult expressions.  We believe Pope Francis will work on
mitigating them.
During his speech in June this year, a smiling Pope Francis
was quoted telling the Vatican’s guests that the Koran, and the spiritual
teachings contained therein are just as valid as the Holy Bible. Indeed the
essence of all faiths is accountability of one’s actions and how one cares for
his neighbor.

Pope Francis is a symbol of humility and epitomizes what a religious
person ought to be, caring, forgiving and loving all of God’s creation.

More about Pope at: http://nabsites.net/demo/pope-francis-is-my-imam-that-is-my/
God
bless the Pope and God bless America!

Mike is a speaker, thinker, writer, pluralist, TV-Radio commentator and
a human rights activist committed to building cohesive societies and offers
pluralistic solutions on issues of the day. His info in 63 links at
MikeGhouse.net and writings at TheGhouseDiary.com