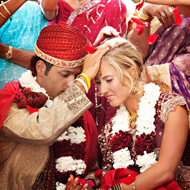 One must admire the couples that marry outside their tradition,
ethnicity, faith, and race. Indeed, they are doing what the spiritual masters
had done for thousands of years; to fall the barriers between people, and
learn to respect the otherness of other and accept the God given uniqueness of
each other.
I have seen disappointments, where couples from different
faiths wishing to marry were not able to do that.  Either the parents or the guardians of the
religions were not comfortable with the situation and did not want to be a part
of it, which we must respect.  All that
the couples wanted was a touch of their own tradition and I feel their anguish and
a sense of in-completion in their marriage when the tradition is not followed.  I recall a situation where a Jewish mother
disowned her daughter for marrying an “infidel” Baha’i, it happens with every religion including Atheists.
By the way, these issues are prevalent chiefly among
immigrant families; however, it is not an issue with the 2nd and 3rd
generation down the line.

Recently I officiated a Jain-Muslim wedding, and it was a pure delight to see the parents on both sides focused on giving their kids a sense of fulfillment that I really had to give
them a hug. After the ceremony the parents were literally crying with joy, it
was a beautiful moment for me to witness their heartfelt joy. I was literally taken back with the admiring looks they bestowed on me.

Here is one of the many paragraphs of the sermon. The others paragraphs dealt
with specifics of each faith and their commonality of values.

The Dharmic (Hinduism, Buddhism, and Jainism) religions
point out that it is your Karma that determines your life path in terms of
continuation of the journey after the body form collapses, into possibly a new form. The same thought is echoed in the Abrahamic (Judaism,
Christianity and Islam) traditions in a different format; a life after the death –
both sides prop up the idea that there is an eternal heaven, Mukti, Moksha,
Nijaat or salvation from the cycles of suffering.  The interfaith (Sikh and Baha’i) religions,
the independent (Zoroastrian) religion and the native traditions as well have a
similar take.  It is all there, it is our
arrogance that prevents us from seeing the good in others.

I just could not believe the request to officiate the weddings since then. I am
happy for them that they saw the essence of each beautiful religion as I shared
with them.    A
Hindu-Jain, A Muslim-Catholic, and a full Muslim wedding are in the making. And
today, I had a call to do, a Hindu/Agnostic wedding.  God willing, it will be a delight to be a part
of happiness of others.

I am writing an article on the topic and will be including
part of the sermon I gave after the main ceremony – I will be happy to share it, if you are serious and have a need for it. Please  send an email to SpeakerMikeGhouse@gmail.com
. It will not be on my blog.
~ ~ ~
Mike Ghouse is committed to building a Cohesive America and
offers pluralistic solutions on issues of the day. He is a professional
speaker, thinker and a writer on pluralism,
politics, civic affairs,
Islam, India, Israel, peace and
justice. Mike is a frequent guest on Sean Hannity show on
Fox TV, and a commentator on national radio networks, he writes weekly at Dallas Morning
News and regularly at Huffington
post,and several other periodicals. www.TheGhousediary.com
is Mike’s daily blog.
Share this: