Ilhan Omar on Free speech.
Thanks to Walter Ruby, I have removed the word Hero from the article.

BEFORE YOU READ THE ARTICLE, PLEASE READ THE FOLLOWING NOTE:

Before you judge, I request you to read the whole thing and the links therein, that is if you want to share your opinion. If you don’t care, you don’t have to read. I am committed to building cohesive societies where no humans have to live in apprehension. It takes a lot of effort to be specific, so does it take to build cohesive communities. We don’t write off the whole person if he or she has cancer, we treat the specifics cells and work on curing them. Years ago, my boss hated Muslims, even though I was not a Muslim at that time, my name was. He taught me the biggest lesson of the life – his hate for Muslims did not prevent him from giving me the highest performance ratings and pay rise in one of the world’s largest engineering firms: Fluor Corporation way back in 1978.

Without any reserve, I condemn Ilhan’s anti-Semitic tropes like the Benjamin’s and other ugly things she has said, but we must appreciate her for seeking to learn about AntiSemitism from her Jewish friends/ colleagues.

I have a stellar record of working for reconciliation and understanding. I firmly believe in free speech; however ugly it may be, it is our value, and we must defend it, I support free speech while condemning through unintentional tropes. We cannot screw up on one of the most enduring values of America; Free speech. We have to deal with Antisemitism through education; if we push and punish people for free speech, anti-Semitism will not disappear, it will brew. I have taken the lead on educating on Holocaust to non-Jews for the last thirteen years and will continue with that education. I have stood up against similar Muslim request to push against Islamophobia, no pushing, no laws, but educating has a better chance of uprooting Antisemitism, and I will do my share of the work. Forcing people makes Antitemism brew and blow up someday like the shooting in the Synagogue recently or defiling the cemeteries two years ago.

Let’s separate free speech from Antisemitism and also define what Antisemitism is, much of the AntiSemitism is resentment towards Likud Governments policies and violations of international consensus. Make no mistake about it, 94% of the nations are resentful against Israel for violating the United Nations resolutions since 1948, it will not go away until Justice is met for the Palestinians, which in turn will result in enduring security for Jews, Judaism, and Israel. Please place your wisdom to work and not the emotion of insecurity, as a Muslim, I align with your sentiment and the feelings of all persecuted minorities.

My mission is to open people’s hearts and minds towards each other. I believe that the ultimate unexpressed purpose of humans is to live freely and be comfortable with one’s culture, race, religion, ethnicity, sexuality, and individuality.

I hope you are ready to read this piece. It is a sensitive issue, so I urge you to ask me questions before you choose to judge me.

Ilham Omar is standing up for free speech. The hypocrites on both the parties are attacking her instead of praising her for preserving the most cherished American value; Free speech. 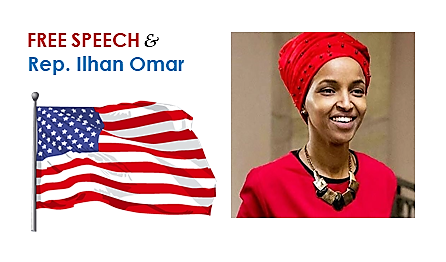 What an embarrassment that our leaders on both sides of the isle bark at free speech. What happened to them? Are they free to criticize?  America is all about free speech! It is the free speech that has made us one of the most successful and stable nations on the earth. Those who are trying to pass the resolutions to curb free speech are hell-bent on destroying the character of our nation. I will not stand for this bullshit, neither should you.

Free speech is the hallmark of civil societies, and it allows people to express their frustrations instead of turning them into resentment, a stepping stone towards freedom.

If you are stereotyping Jews or Judaism and are biased towards them, then it is Antisemitism, and I condemn it unconditionally. Antisemitism is a disease and a mental sickness like homophobia, xenophobia, Islamophobia, Hindu phobia, Idoltaryphobia, misogyny, and other phobias.

At the Center for Pluralism, we chose the route to educate people. For the first time in history, we decided to undertake the education of the Holocaust and Genocides to the general public. We have been organizing the event since 2006, and people from Atheism to Zoroastrianism have participated in learning about the Holocaust, and we will continue to do that.

As a Muslim, I have welcomed criticism of Allah, Muhammad, Islam, and the Quran. There is a full chapter about it in the book American Muslim Agenda available at Amazon, Kindle, Barnes & Nobles and other book stores. No one and nothing should be free from criticism.

I have a sterling record in standing up for free speech, I have defended Pamela Geller’s right to speak in London, even though it was a hate speech. I had fought off vigorously against Hannity on Fox News when he wanted to ban Dr. Ghannouchi from speaking at Yale University, and I have gone against the Arab league’s proposal to ban hate speech against Prophet Muhammad at the United Nations. Furthermore, we resolved the Quran burning issue with Pastor Jones by respecting his right to free speech and not condemning it. There should not be any compromise on free speech; if we do that, America will not be America anymore. Free speech is a God-given right, and no one has a right to take that away.

We should not mess with our heritage of free speech for short term demands.  Free speech is the cornerstone of our culture. It must be defended at any cost. Shamefully, the free speech, a conservative value is anathema to some Republicans. They want to control others, and now some Democrats have joined them in placing restrictions on free speech.  I urge the politicians to wake up and re-embrace the traditional values they have abandoned over a decade. I am not a Republican or a Democrat, but an independent who defends America and the American Values.

We need to quit applying the “Anti-Semitism” mantra to everything and devalue it. It is a disease we need to guard people against, and we should educate the Anti-Semitism shouters, it is not Anti-Semitism, look up the article referenced below, “Anti-Semitism is augmented by Netanyahu” at Huffington Post.

Many states have passed laws against BDS, and I was short on energy to fight that out, it is anti-American. You can bury your head in the sand and think BDK has disappeared, but it is not, it is simmering. Any curb on free speech breeds resentment towards Israel. Let people have the freedom to criticize, don’t take that away, instead educate them, and it is durable and sustainable.

At the Center for Pluralism, we chose the route to educate people. For the first time in history, we decided to undertake the education of the Holocaust and Genocides to the general public. We have been organizing the event since 2006, and people from Atheism to Zoroastrianism have participated in learning about the Holocaust, and we will continue to do that.

If you are a friend of Israel, please “think about it.” Israel’s long-term security hinges on justice to the Palestinians. If you want the Jews around the world to feels secure, that is,  when they can drop their guards and roam about freely anywhere on the earth without apprehension, do the right thing – seek Justice for Palestinians and security for Israel, and one will not happen without the other.  We need a Martin Luther King or another Moses in Israel to liberate the Jews from the gnawing feeling they have about the injustice and mistreatment of the Palestinians. The ultimate freedom and security of the Jewish people lay in being who they are; a just people.

1. Haaretz, March 7, 2019 –  Keep it up, Ilhan
2. Huffington Post,  December 8, 2019 – Anti-Semitism is augmented by Netanyahu
3. Huffington Post, January 23, 2014 – Holocaust and the Muslim Guy
4. Website – Holocaust and Genocides
5. Newsweek opinion – I am Jewish and hypocrisy of GOP is deplorable
6. Israeli General on Anti-Israel is not Anti-Semitism

What an embarrassment that our leaders on both sides of the isle bark at free speech, not at the powerful ones like our President, but the vulnerable ones like Ilham Omar.  What happened to their freedom? Are they free to criticize anyone or only those who are vulnerable and cannot fight back?  I am a great fan of President Obama and have written about 75 pieces admiring his acts, but I am glad Ilhan Omar criticized him on his bad policy of drones.  Hail to Ilhan Omar!

Dr. Mike Ghouse is committed to building cohesive societies and offers pluralistic solutions on issues of the day. His new book, the “American Muslim Agenda” is about everything you wanted to know about Muslims. The book is available at Amazon, Barnes and Noble and Kindle. Mike is a public speaker, author, interfaith wedding officiant, a newsmaker and the executive director of the Center for Pluralism in Washington, DC. More about him in three formats at https://www.linkedin.com/in/mikeghouse/

Please note: This is sent for publication, once that is done, we will publish it on our websites www.CenterforPluralism.com | www.WorldMuslimcongress.com | www.TheGhouseDiary.com

About the book: American Muslim Agenda

The essence of Islam was never explained to Muslims or the non-Muslims before, and the emphasis has always been adherence to rituals. Rituals are a part of Islam or any system, but that is not whole Islam. Islam is not about ruling others, and it is not about imposing oppressive laws or considering others to be second class citizens under their rule. Islam is about free will; in fact, Islam was built on free will. Islam is a religion of universe, a religion of human nature, and it is about living your life in harmony within yourselves (rituals) and with others (essence). It is about living your life and letting others live in dignity and freedom.  If it is not common sense, then it is not Islam. Period!

The book will become a reference manual to teach Islamic values; each chapter is beefed up with verses from the Quran and an occasional Hadith. This book is about Public Islam and the Quran supports it all, for private Islam one may need the support of Hadiths.

The bottom line of Islam’s teachings is to create better citizens (also known as Muslims). This book is about building cohesive societies through 12 Islamic values, never written before in the pages of Islamic history but it was always there. This book highlights the universal principles of Islam that anyone one adopts to build a better world. Being Muslim is not a requirement of Allah, the entire universe is Allah’s creation and the best ones among us are those who care about his creation to include the whole world and 7.5 billion humans and trillions of other life forms. A few talking points at www.AmericanMuslimAgenda.com, You can get the book from Amazon, Kindle, Barnes & Nobles and other book stores if you want an author signed copy PayPal the funds to Mike Ghouse + $4.50 for shipping through ups.

If you are interested in hosting Q&A session, please let me know.

What have we accomplished at the Center for Pluralism?
http://centerforpluralism.com/mission-accomplished-at-the-center-for-pluralism/