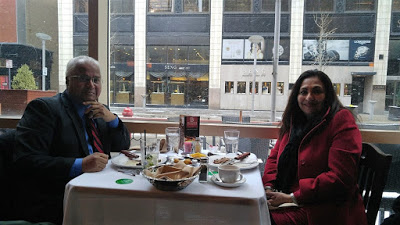 Spread the love
What a joy it is to sing songs about America while
praying for other nations to be blessed like ours,  and live like us, which is live your life and
let others live theirs. There is nothing like America.
Yasmeen and I were at Brazarios Restaurant in down town
Louisville for the Valentine’s Day lunch. What I want to share is our
conversation and what we saw around us, which I have captured to a little
extent in the camera, though the pictures aren’t good, but you can see through them.
On the table to our right were African American Couples,
two tables down was a white middle aged couple, and behind to the right of us
were a Chinese Couple with a few Japanese with them, and one directly behind two
tables was a gay couple and way to the right was a Jewish couple.
I can’t tell you the euphoric feeling to be in the midst
of this environment. This is the America we all cherish and want to
sustain.  Just 55 years ago, this would
not have happened, none of this would have been possible. Thanks to Martin
Luther King, John F Kennedy, Lyndon B Johnson and the majority of White Americas
for uplifting America to be one of the most exemplary nations on the earth.
Regardless of the rhetoric of a few (yes a few) men in
the fore front, who are misogynists, homophobic, xenophobic, Islamophobic and anti-Semitic,
America ain’t like them and a majority of American’s are like them either. The
presidential candidates are not a representation of Americans.

America is a nation where we respect the otherness of others, and accept the
God given uniqueness of each one of us whether we are Atheists, Baha’i, Buddhist,
and Christian, Jain, Jewish, Muslims, Native Americans, Pagans, Sikhs, Wicca,
Zoroastrians and every one in between.

It saddens me to see “a few” radicals among Hindus and
Muslims, who are hell bent on  terrorizing
or harassing the lovers in India and Pakistan, be it in a store or restaurant,
let alone in the parks. I wish the heads of the states in both nations speak up
and tell everyone that they will not tolerate harassing and terrorizing fellow
countrymen for celebrating Valentine’s day. Here is a note for them at www.TheGhousediary.com or www.Interfaithspeaker.com
I also appeal to a few religious parents in America not
to put down our culture, you can tell your kids that Valentine’s day is not a
part of your tradition, but you cannot put it down, as their friends do
celebrate and your kids don’t see anything wrong with the celebration.  If you oppose them, you are pushing them to
live two lives – one a pretentious life with you and the other with their
friends and that is wrong. You have a choice to raise them in another country
where they live their lives in silos. No one should live two lives and it is
not good for them or you.

Next year, if I am alive, we will have discussions within the ethnic and
religious groups who are yet to integrate in our society.  Meanwhile, enjoy my current article at www.TheGhouseDiary.com

Dr. Mike Ghouse is a community consultant, social
scientist, thinker, writer, news maker, and a speaker on Pluralism, Interfaith,
Islam, politics, terrorism, human rights, India, Israel-Palestine and foreign
policy. He is committed to building cohesive societies and offers pluralistic
solutions on issues of the day. Visit him in 63 links at www.MikeGhouse.net for
his writings at TheGhousediary.com and several blogs listed there in.