On this auspicious day of the 550th anniversary of Guru Nanak Devji’s birthday, as a Muslim, and on behalf of the Center for Pluralism, I wish peace, harmony, and blessings to the world. This spirit of uniting people is the need of the day, and may this Gurpurab bring that light to the world.

Guru Nanak, like all the great souls of the world, was concerned about the conflicts between different communities in India during his time. He started a movement to bring the Hindus and Muslims together and uplift the downtrodden and the Dalits and remove the caste barriers and bring sanity to the world. The central value of his teachings is serving fellow humans and caring for others.

I am pleased to share a few points, including my interest. It is a story long overdue, and I have cut down the piece in half due to space. Thanks to Indian Panorama for publishing this piece. 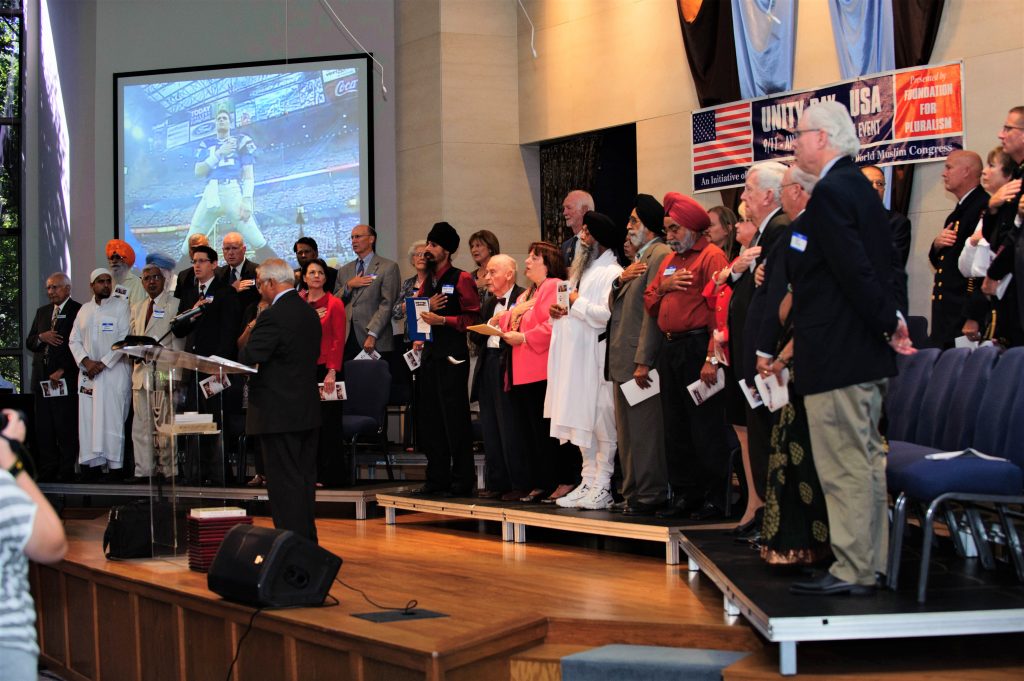 My Nana, whom we called “Sikh Nana” wore precisely the same colorful turban the Sikhs wear. I see him in many pictures of the Guru Nanak. I am a Sardar myself, of course, that is my alias name. I had extensive conversations with the Sikhs in the mid to late sixties, who served at Yelahanka Airforce Station and came to our mill to get their wheat grounded into flour, and I had the opportunity to spend time and learn about Sikhism.

Thanks to my social studies book in the sixth grade at the Urdu Middle School in Yelahanka, a suburb of Bangalore. The book had two pages each for all the religious icons of the world. That’s when I learned about Guru Nanak and Sikhism. I took my kids to the Garland Gurdwara Sahib several times, and I have visited all the five Gurdwaras in Dallas, Texas. We held two significant events in our annual programs – one was to honor Sikhs for their exemplary model of dealing with Wisconsin shooting, and the other was to commemorate the Sikh Genocide.

The Center for Pluralism defines Pluralism, “Respecting the otherness of the other,” and accepting the God-given uniqueness of each one of us. Guru Nanak believed in respecting the otherness of the other and was never hesitant to call on the corrupt practices that did not recognize the equality of others. He made a point to teach those values whether you were a peasant or a king, pauper or wealthy, he proclaimed, God was accessible to every human equally.

Guru Nanak said that a true Hindu and true Muslim is one who follows his path, and several centuries later, Mahatma Gandhi reiterated that a good Sikh is a good Hindu and a good Muslim is a good Christian.

The lowest among the low castes,
lower than the lowliest,
Nanak is with them:
He envies not those with worldly greatness.
Lord! The glance of grace falls on the land
where the humble are cherished.

Guru Nanak believed in living the God-given life to the fullest extent. Like Buddha and Prophet Muhammad, he did not ask anyone to give up living their life and become an ascetic. He preached that spirituality is serving fellow humans and being one with all.

“A holistic understanding of Peace, undergirded by ideas of equality and fraternity, is a part of the Sikh tradition. The very origin of Sikhism is linked to overcoming communal hatred and divisions of his time. Guru Nanak emphasized universal kinship as the highest of religious aspirations and urged his followers to treat all human beings as brothers and sisters. Particularly crucial for Sikhism is the overcoming of all discrimination based on caste, class, or creed – which are impediments for Peace.” Pursuing Peace in a pluralistic world.

I had the pleasure of endorsing two books on Sikhism this year. One is called “Guru Nanak’s Religious Pluralism and the Guru Granth Sahib” by Dr. Harbans Lal and Roshan Attrey. What makes this book different from others is its emphasis on Pluralism and interfaith aspects of the Sikh belief system.

Dr. Harbans Lal writes, “A pluralistic society is one where multiple things, multiple viewpoints, multiple belief systems, can exist at the same time. More importantly, it is a society where minority religious groups can maintain their cultural and religious traditions without any fear.” The other book is Unity in Diversity by Daljit Singh Jawa, and I wrote on the cover, “Who could write a book on interfaith in the most authentic way?

The very foundation of Sikhism is Pluralism. The Guru Granth Sahib, the holy book of guidance, is composed of Hindu and Muslim spiritual teachings.

Of course, rituals are pathways in finding whatever you are set to find, and Sikhism also has religious rituals.

When you think of Sikhs, one of the first things that come to your mind is service. They strongly believe in feeding the hungry, and their food is like the last supper; it never ends. Great food!

Diana Eck, writes in Dallas Morning News, “This hospitality is not just a gesture; it is foundational to the Sikh faith. Eating together is what knits the Sikh community together and breaks down the barriers that divide the wider human community. In caste-conscious India of the 15th century, when the teacher Guru Nanak first gathered what became the Sikh community, the common meal was an egalitarian human revolution. In plain ritual language, it spelled out the fact that among Sikhs, there would be no discrimination of high caste or low, no male or female, no Muslim or Hindu, no Sikh or non-Sikh. We are just people, equal in the eyes of the one God. Eating together symbolizes a Sikh’s rejection of discrimination and prejudice. May we all share more common meals as we discover what “we the people” truly means.”

On August 5, 2012, a gunman Wade Michael Page walked into the Sikh Temple in Oak Creek, Wisconsin and opened the fire killing six people causing tremendous panic and apprehension. It all started with the murder of Balbir Singh Sodhi, a gas station owner in Phoenix, Arizona. The harassment continued, the humiliation of Dr. Prabhjot Singh, a Sikh Professor in New York and harassment of Mr. Jagjeet Singh, a truck driver by a Judge in Mississippi.

They followed the teachings of Guru Nanak by responding to the Wisconsin massacre with patience, forbearance, and kindness, and it was the right thing to do when tragedy befalls a community. They set a new benchmark in America for dealing with adversity.

The Sikhs across America chose the most powerful tools of all: Prayer and forgiveness. Indeed, it resonates with the teachings of all the great masters, and recently Mahatma Gandhi’s Dandi March and Martin Luther King’s march in Selma. It disarms the oppressor, and the message of goodness gets conveyed.

Every Gurdwara in America held candlelight vigils and speeches focused on forgiveness and goodwill – http://www.youtube.com/watch?v=vNxrf8fFU0I

The selfless service to humankind, known as Seva, is central to the teaching of Sikhism. There is no thought of reward or gains, and it is pure service to fellow beings.

The Sikh community was appreciated by one and all at the annual Unity Day USA in Dallas. 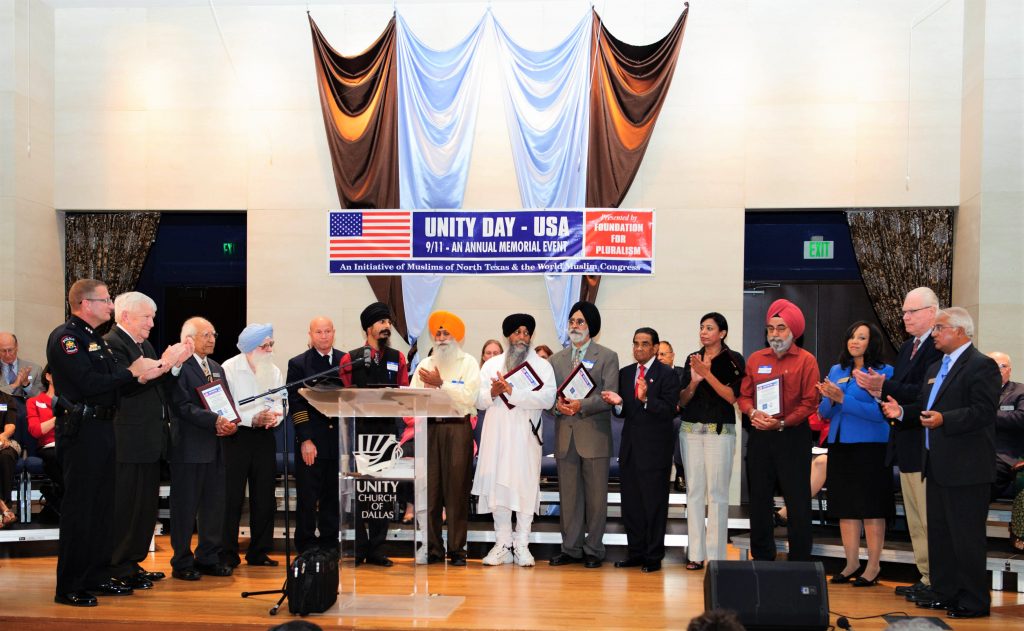 Commemorating the Sikh Genocide by the Center for Pluralism

Sikhism began as a reconciliatory effort in nurturing goodwill between people of different faiths. On this 550th birth anniversary of Guru Nanak, I would urge Sikhs and others to reconcile the sparks of ill-will over the existence of Sikhism.

We need to revive the spirit of reconciliation. We need to pull our heads out of the sand and face the world and bring long-lasting freedom to all of us. An awkward but heart to heart dialogue among communities is the way forward, and we cannot pass on the ill-will gene to the next generation, if we understand the source of the conflict, we can find a solution.

The sparks of the conflict lay dormant and burst into flames as a surprise resulting in the Sikh Genocide of 1984, which needs addressing squarely. Justice is due to the families who lost their loved ones. I will not go into details, but we need to understand the pain of the mothers who are still waiting to know the whereabouts of their children. Justice is the only cure to build peaceful societies.

The conflict with Mogul Kings needs to be reviewed and understood in its historical context. The power struggles between competing Kings are a part of the equation.

On this auspicious occasion of Gurpurab, the Sikhs can make a genuine effort to pay tribute to the spirit of Guru Nanak Dev and remove the misunderstandings that erupted from a wrong translation of a verse in the Quran. It happened four centuries ago during the reign of Aurangzeb and has been rightfully etched in the psyche of some Sikhs. I have shared the correct version of the verse with Dr. Avtar S. Dhaliwal from Tennessee. It originated at the Parliament of World’s religions in Melbourne, Australia, a decade ago.

The partition of India has caused a lot of unforgettable pain; children were mercilessly thrown from the moving trains, women raped, and men were brutally murdered. The pain will not go away, but we can make an effort to prevent this pain from passing it on to the next generation in the form of ill-will. The children don’t deserve to carry our problems.

If the people who suffered on all sides sit down face to face and see the humanity in each one of them, we can learn to purge our hearts from the pain. I have talked with Hindu, Muslim, and Sikh families who have endured that pain. Most of them have forgiven each other, don’t hold it against the offspring of the others.

The Indian community is grateful to the Sikh Community for standing up to defend the Maryada of Kashmiri Muslim women, after the abrogation of article 370 in Kashmir. I know, millions of Muslims prayed for the Sikh community for doing the right thing, and I know many Muslim women have cried and prayed for the Sikhs. I had a tear in my eyes as well to know that the people are still there on this earth and thank Guru Nanak for creating a beautiful community of authentic sevaks.

Congratulations on building the Kartarpur Corridor. That is one thing the Indian and Pakistani politicians have done well.

Standing up for Sikhs http://standingupforothers.blogspot.com/2012/08/standing-up-for-sikhs.html

May the noor (divine light) of Guru Nanak brighten the world. Amen! Let each one of the humans live freely and securely with their Turbans, Hijabs, Kippas, dhotis, crosses, and the robes. Amen!

Speaking at this event in New York 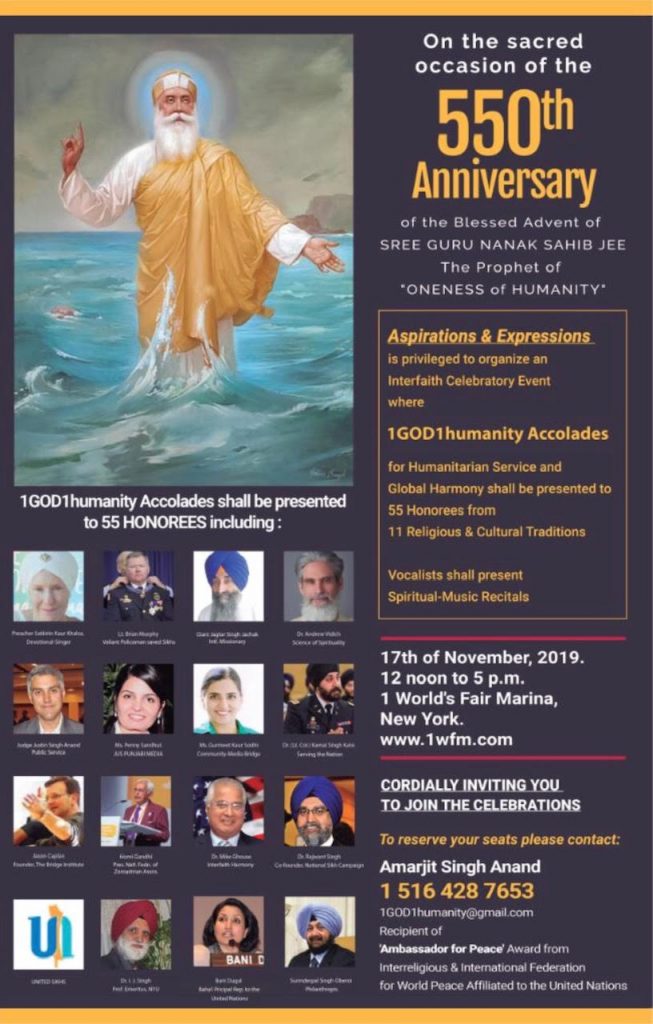 Mike Ghouse is a thinker, author, speaker, newsmaker, and an interfaith wedding officiant. His new book American Muslim Agenda is available on Amazon, coming up are books on Human Rights and Pluralism. He is committed to building cohesive societies and offers pluralistic solutions on issues of the day. His information is linked-in.