Religions are never a problem; it is always men and who make their faith and their God a villain of others.

A few Jews believe that they are the chosen people,
A few Christians think when Jesus arrives at the end, everyone will be wiped out,
A few Muslims believe Islam is the only religion acceptable to God,
A few Hindus, Sikhs and others have similar arrogant attitudes that they are the best.
If you are an individual that hates other people, you are the problem and not others religion. 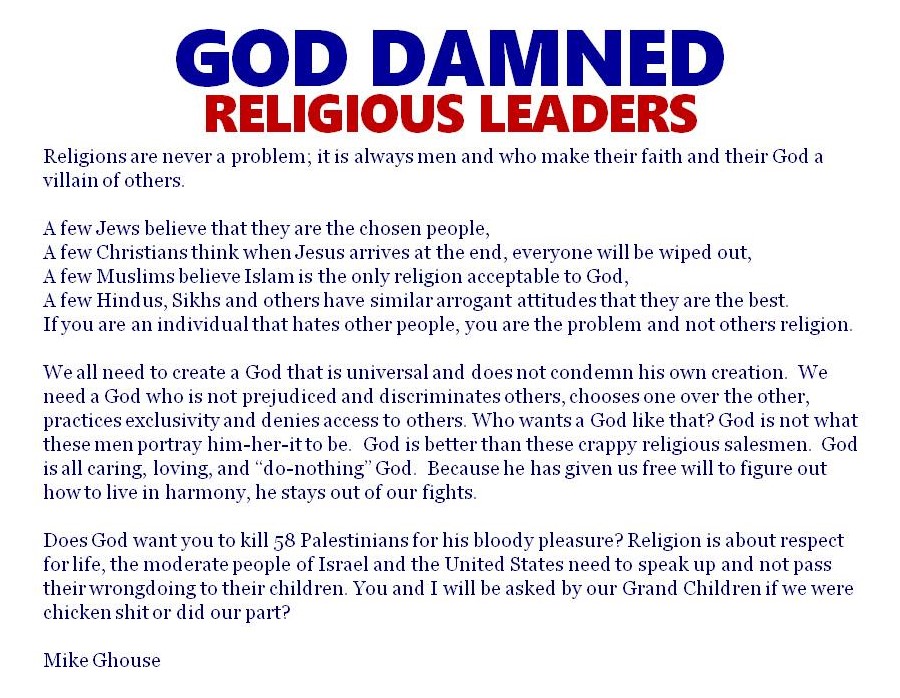 We all need to create a God that is universal and does not condemn his own creation.  We need a God who is not prejudiced and discriminates others, chooses one over the other, practices exclusivity and denies access to others. Who wants a God like that? God is not what these men portray him-her-it to be.  God is better than these crappy religious salesmen.  God is all caring, loving, and “do-nothing” God.  Because he has given us free will to figure out how to live in harmony, he stays out of our fights.

Thanks to Mitt Romney for speaking up against that creep Pastor Robert Jeffress, who is a stain on Baptist Church of America. I hope more Americans and Israelis will speak out.

Does God want you to kill 58 Palestinians for his bloody pleasure? Religion is about respect for life, the moderate people of Israel and the United States need to speak up and not pass their wrongdoing to their children. You and I will be asked by our Grand Children if we were chicken shit or did our part.