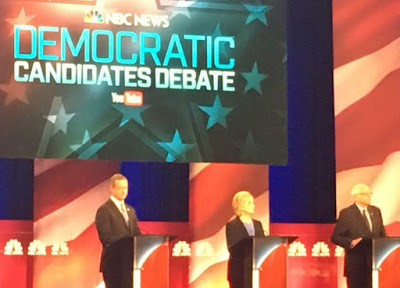 What a contrast it is with the Republican debates! It was a
pleasure to hear the Democrats talk about keeping America great. This is one of
the greatest nations on the earth for the values it stands and the values her
majority supports. The Republicans on the other hand talk about making America
great, but put her down every time they open their mouth.

I have to ask my Republican friends, whose party was built on great principles,
where are the mainstream representatives of the Republicans?  It is not what the guys like Trump, Cruz,
Rubio, Carson and their likes say, it is the evil silence of the mainstream
Republicans that bothers me… and after 30 years, I quit being a Republican for
that very same reason.


The Democrats are about uplifting America, increasing the minimum wage, equal
pay for equal work to men or women, and let Americans have their liberty and go
after the pursuit of their happiness with liberty and justice for all. The
Republicans are opposed to these values.

The Democrats were talking about integrated societies with fair treatment of the
different components of the society – Blacks, Hispanic, Muslims and others.
The Democrats want to
hold those police officers accountable who are racist or do not follow the law,
whereas the Republicans want to back the blue blindly.
The Democrats believe
in keeping America healthy, and the responsibility of the state, whereas the
Republicans do not care. That is, if you leave it completely to private sector
and market place to determine, we go back to the pre-civil rights era.  Not acceptable.

The Democrats understand the climate change and its terrible consequences, the
Republicans refuse to accept that the carbon emissions had polluted our air,
and we had to fix that, so we can breathe.

The Democrats see the global warming and want to fix it, whereas the
Republicans deny it. Not because they are not aware of it, but because they are
bought out by the fossil fuel producers and owners.

I like Fox TV much
better to watch the debates and sports; they keep their screens clean and
active. NBC’s background music during the breaks was annoying to the point of
me making the point. Fox Manages breaks much better.
We have to bust the
power of Wall Street and the rich guys who buy the Senators Congressmen and
Presidential Candidates to do what is in their interest.  Our Democracy is at risk, if we do not have
our representative represent us and instead represent the men who throw bones
at them.

Democrats support normalization of relations with Iran, one less tension to
have, but Republicans don’t want that because, once again not because they don’t
understand, but because Netanyahu and his lobby has bought them out.

No more boots on grounds, war is evil, where as Republicans are too eager to go
destroy others and in the process destroy America.

What is needed is for the Good Republicans to speak up, and let their goodness
prevail over the pettiness of the entire crew of Presidential candidates.

My notes about  the Republican Debate – http://nabsites.net/demo/pathetic-republican-debate-on-1142016/

Mike Ghouse, an independent
My loyalty is to America and not the Party.

Dr. Mike Ghouse is a community consultant, social scientist, thinker, writer,
news maker, and a speaker on Pluralism, Interfaith, Islam, politics, terrorism, human rights, India, Israel-Palestine and foreign
policy. He is committed to building cohesive societies and offers
pluralistic solutions on issues of the day. Visit him in 63 links at
www.MikeGhouse.net for his writings at TheGhousediary.com and several blogs
listed there in.