Columbus, Ohio, September 28, 2019 — The American Federation of Muslims of Indian origin, held their 29th annual conference with a theme of contributions of Indian Muslims to world Heritage.

If all the 1.25 billion Indians were attending this event, they would have cherished the Indian Muslims for highlighting the pluralistic ethos of India. Speaker after speaker was talking about building a cohesive India that cares and uplifts each one of the 1.25 billion Indians. The final remarks summed up by Dr. Nakadar with the prayer God bless America, and God bless India resonated with most people.

AFMI’s noble mission is to help Muslims in India contribute towards the social, political, and economic development of India through increased education. Indeed, since 1989, the year AFMI took its first step, the literacy rate of Muslims in India has risen from 30% to 70% now. AFMI has been one of the catalysts in these significant achievements. AFMI board members predict the number to rise to 75% in the next census to catch up with India’s overall rate of 75% literacy. 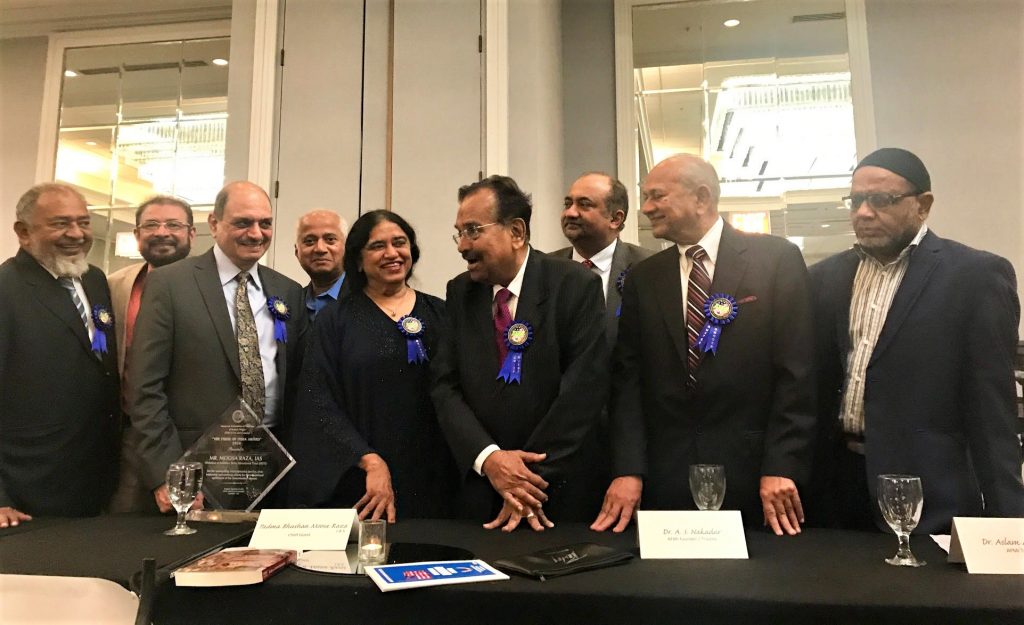 From times immemorial, India has contributed towards science, mathematics, medicine, and the richness of the world through knowledge.

The Moguls were native sons of the soil, born and raised in India and took the nation to new heights of economic development and fostering integration and encouraging interfaith dialogue. During Mogul rule, India had reached its peak achievement, and it became the world’s largest economy producing 25% of the world’s GDP. India was rightfully called the sonay ki chidiya, the Golden bird during their times.

They also brought most of the smaller kingdoms into one vast nation and had cultivated a strong, stable, and a cohesive India.  India was one nation under their rule.

The Moguls also ushered into a Golden period of translations of the Indian wisdom of Vedas, Puranas, and other books into other languages and internationalized the knowledge.

The Europeans were way behind and started eyeing on India’s wealth. They remained foreigners, were not born in India nor chose to stay and develop the nation. Their focus was on grabbing the resources and shipping back to their kingdoms.  Indeed, for the first time in India’s history, the nation’s wealth was transferred out of India, and the loot continued for the next 200 years until we got our independence.

We had to reshape the future, and my focus in the next few paragraphs is on education.

Thanks to Mahatma Gandhi for his efforts to restore India to its ethos of Pluralism. He carefully crafted brand India as the land of Ahimsa, which is non-violence and equality of humans. Dr. Ambedkar enshrined the secular ideals of Pandit Nehru, Unified India’s dream of Sardar Patel and the pluralistic vision of Maulana Azad into our constitution.

Maulana Azad was tasked to build educational institutions of higher learning that propelled India to be a force to reckon. Today, India is a leading nation in the world software development, and our Engineers and Doctors are serving humanity across the globe. We have achieved that through meticulous planning and focusing on education.

However, the Indian Muslims were left behind during the British period. Sir Syed Ahmed noted this over a century ago, and initiated modern education for Muslims to catch up with the other communities of India.

One person usually initiates all the good things in a nation. Then others join and add more to the goodness. The poet Majrooh Sultanpuri wrote this eternal couplet to describe social movements.

Indeed, that Akela person who walked towards the Manzil was Dr. Nakadar. Others joined him, and the AFMI movement started – The American Federation of Muslims of Indian Origin.  The founding members committed themselves to turn around the literacy rate among Indian Muslims, and they saw the salvation of Muslims through education. If you uplift one community, it raises the whole nation. All of us rise and fall together. Thirty years ago, the year AFMI embarked on its mission, the Muslim literacy rate was 30%, and it is 70% now. They have been a significant catalyst in bringing a positive change to India.

Dr. Nakadar and his fellow trustees and board members are witnessing their efforts bear the fruit in their lifetime.  What a joy it is!  You can join them and see your effort bear fruit in your lifetime.

I become a fan of AFMI in 1996 at their annual event in Dallas, Texas. Here is one short story from that event worth pondering. Taj Syed and I were assigned to receive Dilip Kumar and Saira Banu from the airport and care for them during their stay. When we checked them into the Omni Hotel in Richardson, Texas. Saira Banu seemed annoyed by the hotel room, she started picking up the pillows and flipping them as if there were some clues in it. She said, “Mujhe yahan Nahin rahna hai,” Of course, I can understand that it was a three-star hotel, but the only hotel close to the conference center.  I panicked and started reaching out to Akram Syed, the key organizer.

Dilip Kumar Saheb patted on my shoulder from the back, as I was watching Saira Banu’s frustration with the pillows. He asked me, “If we were to stay here where would such savings go?”  I looked up at him and said, Dilip Saheb, “A program bachchon ki taleem ke liye hai, paise waheen jayeinge.”

He pondered for a few seconds, in typical Dilip Kumar style, and called on Saira, “Saira, hum yahein rahienge, jo paise bachte hain of bachchon ki taleem ke liye jayeinge.” She made the face, and reluctantly agreed to his persuasive language.

From that day, Dilip Kumar became a big human being for me and my respect for him knew no bounds. What a great man he was! He could have demanded a five-star hotel but was willing to stay in a three-star hotel as it benefited the children. What a humble couple. May God make more Dilip Kumars.  There were a few other beautiful incidents, that I will share in the next meeting, Insha Allah.

I see another great leader in Padma Bhushan Masood Raza Saheb, it is amazing what he has done. His language was pure pluralism. He was citing the dialogue between Krishna and Arjuna to make a point. That is when I decided to give him my poem “Achche din Kab Aayeienge?” as it weaves through different religions.  Dr. Angana Chatterjee’s talk was about Human rights, empathy for the pain of others and the incredible research work she is doing at Berkley. Dr. Nakadar’s commitment to serving fellow humans is inspiring. He remained dedicated to the purpose of education and we see the results. God bless them all.

The other speakers were;

All the speakers were inspirational, including the dinner speeches by Padma Bhushan Moosa Raza, Dr. Angana Chatterjee, and Dr. AR Nakadar. 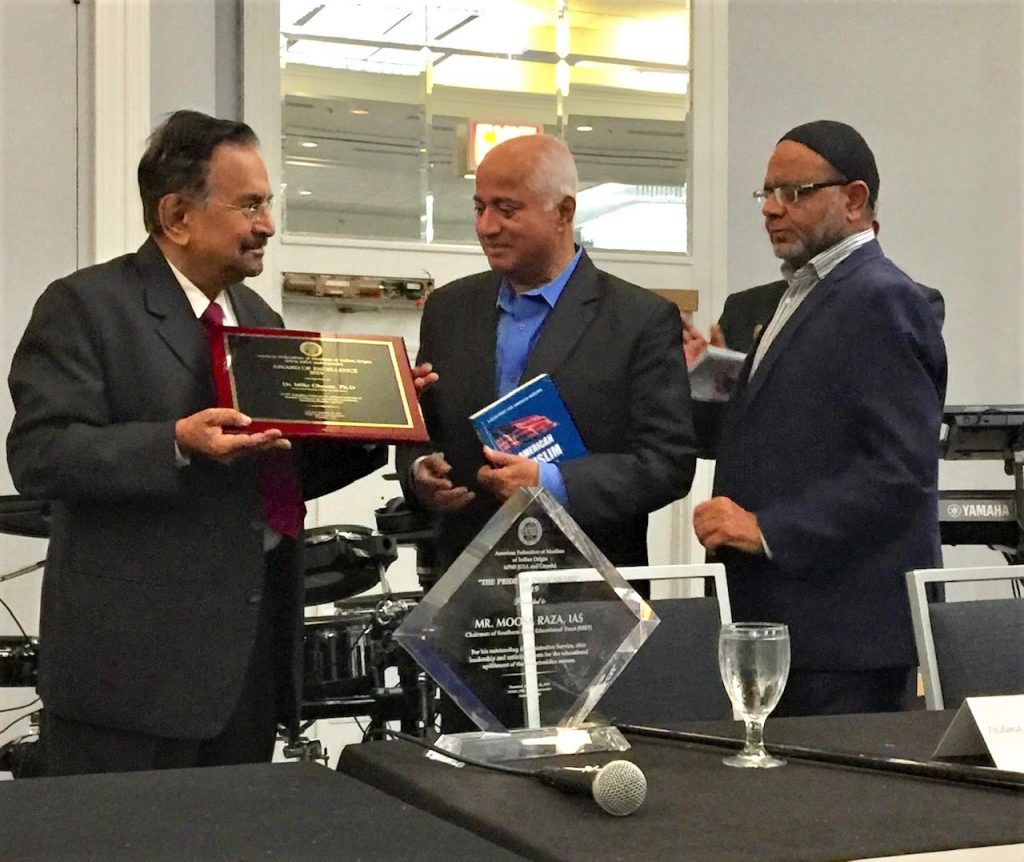 Several members were recognized for their contributions to the betterment of society.   Highlights of my talk delivered partially due to time. But full version is available at my blog TheGhouseDiary.com

Mike Ghouse is committed to building cohesive societies and offers pluralistic solutions on issues of the day. He is a speaker, thinker, author, newsmaker and interfaith wedding officiant. He had dedicated his life to promoting the ideals of Pluralism in religion, politics, society, culture, and race. More at www.CenterforPluralism.com